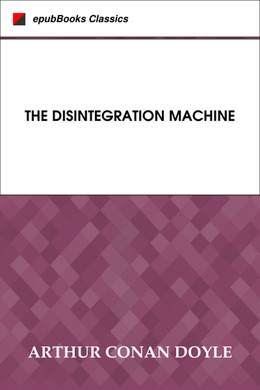 The Disintegration Machine is a short story written about Professor Challenger by Sir Arthur Conan Doyle. Professor Challenger is arguing with people who are persistently calling him on the telephone when his young friend Malone, a reporter for the Gazette, enters and requests Challenger accompany him to inspect the discovery of Theodore Nemor, who claims to have invented a machine capable of disintegrating objects. Skeptical of the invention, Challenger accepts Malone’s proposal and accompanies him to the house of Nemor.

Professor Challenger was in the worst possible humour. As I stood at the door of his study, my hand upon the handle and my foot upon the mat, I heard a monologue which ran like this, the words booming and reverberating through the house:

‘Yes, I say it is the second wrong call. The second in one morning. Do you imagine that a man of science is to be distracted from essential work by the constant interference of some idiot at the end of a wire? I will not have it. Send this instant for the manager. Oh! you are the manager. Well, why don’t you manage? Yes, you certainly manage to distract me from work the importance of which your mind is incapable of understanding. I want the superintendent. He is away? So I should imagine. I will carry you to the law courts if this occurs again. Crowing cocks have been adjudicated upon. I myself have obtained a judgement. If crowing cocks, why not jangling bells? The case is clear. A written apology. Very good. I will consider it. Good morning.’

It was at this point that I ventured to make my entrance. It was certainly an unfortunate moment. I confronted him as he turned from the telephone—a lion in its wrath. His huge black beard was bristling, his great chest was heaving with indignation, and his arrogant grey eyes swept me up and down as the backwash of his anger fell upon me.

‘Infernal, idle, overpaid rascals!’ he boomed. ‘I could hear them laughing while I was making my just complaint. There is a conspiracy to annoy me. And now, young Malone, you arrive to complete a disastrous morning. Are you here, may I ask, on your own account, or has your rag commissioned you to obtain an interview? As a friend you are privileged—as a journalist you are outside the pale.’

I was hunting in my pocket for McArdle’s letter when suddenly some new grievance came to his memory. His great hairy hands fumbled about among the papers upon his desk and finally extracted a press cutting.

‘You have been good enough to allude to me in one of your recent lucubrations,’ he said, shaking the paper at me. ‘It was in the course of your somewhat fatuous remarks concerning the recent Saurian remains discovered in the Solenhofen Slates. You began a paragraph with the words: “Professor G. E. Challenger, who is among our greatest living scientists—”’

‘Why these invidious qualifications and limitations? Perhaps you can mention who these other predominant scientific men may be to whom you impute equality, or possibly superiority to myself?’

‘It was badly worded. I should certainly have said: “Our greatest living scientist,”’ I admitted. It was after all my own honest belief. My words turned winter into summer.

‘My dear young friend, do not imagine that I am exacting, but surrounded as I am by pugnacious and unreasonable colleagues, one is forced to take one’s own part. Self–assertion is foreign to my nature, but I have to hold my ground against opposition. Come now! Sit here! What is the reason of your visit?’

I had to tread warily, for I knew how easy it was to set the lion roaring once again. I opened McArdle’s letter. ‘May I read you this, sir? It is from McArdle, my editor.’

‘I remember the man—not an unfavourable specimen of his class.’

‘He has, at least, a very high admiration for you. He has turned to you again and again when he needed the highest qualities in some investigation. That is the case now.’

‘What does he desire?’ Challenger plumed himself like some unwieldy bird under the influence of flattery. He sat down with his elbows upon the desk, his gorilla hands clasped together, his beard bristling forward, and his big grey eyes, half–covered by his drooping lids, fixed benignly upon me. He was huge in all that he did, and his benevolence was even more overpowering than his truculence.

“Please call upon our esteemed friend, Professor Challenger, and ask for his co–operation in the following circumstances. There is a Latvian gentleman named Theodore Nemor living at White Friars Mansions, Hampstead, who claims to have invented a machine of a most extraordinary character which is capable of disintegrating any object placed within its sphere of influence. Matter dissolves and returns to its molecular or atomic condition. By reversing the process it can be reassembled. The claim seems to be an extravagant one, and yet there is solid evidence that there is some basis for it and that the man has stumbled upon some remarkable discovery.

“I need not enlarge upon the revolutionary character of such an invention, nor of its extreme importance as a potential weapon of war. A force which could disintegrate a battleship, or turn a battalion, if it were only for a time, into a collection of atoms, would dominate the world. For social and for political reasons not an instant is to be lost in getting to the bottom of the affair.