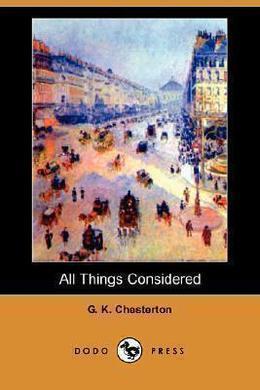 All Things Considered features more than thirty columns that G. K. Chesterton wrote for the London Daily News in the years before World War I. Covering a variety of themes, each is written with the same high quality that readers have come to expect of Chesterton. In an essay on canvassing, Chesterton ponders some unusual double standards. In another, he writes about daily annoyances. Another covers literature. But regardless of the topic, each of the essays in All Things Considered is the usual Chesterton masterpiece, tempting the reader to track down even more of the 4,000 newspaper columns penned by Chesterton during his career. G. K. Chesterton is well known as a novelist, essayist, storyteller, poet, philosopher, theologian, historian, artist, and critic. He’s less well-known as a journalist these days, yet all evidence indicates that he viewed his work for the various newspapers as his primary raison-de-etre. Therefore anyone interested in exploring the works of this colossal genius should include a sampling of his newspaper columns along with all of his other brilliant books.

I cannot understand the people who take literature seriously; but I can love them, and I do. Out of my love I warn them to keep clear of this book. It is a collection of crude and shapeless papers upon current or rather flying subjects; and they must be published pretty much as they stand. They were written, as a rule, at the last moment; they were handed in the moment before it was too late, and I do not think that our commonwealth would have been shaken to its foundations if they had been handed in the moment after. They must go out now, with all their imperfections on their head, or rather on mine; for their vices are too vital to be improved with a blue pencil, or with anything I can think of, except dynamite.

Their chief vice is that so many of them are very serious; because I had no time to make them flippant. It is so easy to be solemn; it is so hard to be frivolous. Let any honest reader shut his eyes for a few moments, and approaching the secret tribunal of his soul, ask himself whether he would really rather be asked in the next two hours to write the front page of the Times, which is full of long leading articles, or the front page of Tit–Bits, which is full of short jokes. If the reader is the fine conscientious fellow I take him for, he will at once reply that he would rather on the spur of the moment write ten Times articles than one Tit–Bits joke. Responsibility, a heavy and cautious responsibility of speech, is the easiest thing in the world; anybody can do it. That is why so many tired, elderly, and wealthy men go in for politics. They are responsible, because they have not the strength of mind left to be irresponsible. It is more dignified to sit still than to dance the Barn Dance. It is also easier. So in these easy pages I keep myself on the whole on the level of the Times: it is only occasionally that I leap upwards almost to the level of Tit–Bits.

I resume the defence of this indefensible book. These articles have another disadvantage arising from the scurry in which they were written; they are too long–winded and elaborate. One of the great disadvantages of hurry is that it takes such a long time. If I have to start for High–gate this day week, I may perhaps go the shortest way. If I have to start this minute, I shall almost certainly go the longest. In these essays (as I read them over) I feel frightfully annoyed with myself for not getting to the point more quickly; but I had not enough leisure to be quick. There are several maddening cases in which I took two or three pages in attempting to describe an attitude of which the essence could be expressed in an epigram; only there was no time for epigrams. I do not repent of one shade of opinion here expressed; but I feel that they might have been expressed so much more briefly and precisely. For instance, these pages contain a sort of recurring protest against the boast of certain writers that they are merely recent. They brag that their philosophy of the universe is the last philosophy or the new philosophy, or the advanced and progressive philosophy. I have said much against a mere modernism. When I use the word “modernism,” I am not alluding specially to the current quarrel in the Roman Catholic Church, though I am certainly astonished at any intellectual group accepting so weak and unphilosophical a name. It is incomprehensible to me that any thinker can calmly call himself a modernist; he might as well call himself a Thursdayite. But apart altogether from that particular disturbance, I am conscious of a general irritation expressed against the people who boast of their advancement and modernity in the discussion of religion. But I never succeeded in saying the quite clear and obvious thing that is really the matter with modernism. The real objection to modernism is simply that it is a form of snobbishness. It is an attempt to crush a rational opponent not by reason, but by some mystery of superiority, by hinting that one is specially up to date or particularly “in the know.” To flaunt the fact that we have had all the last books from Germany is simply vulgar; like flaunting the fact that we have had all the last bonnets from Paris. To introduce into philosophical discussions a sneer at a creed’s antiquity is like introducing a sneer at a lady’s age. It is caddish because it is irrelevant. The pure modernist is merely a snob; he cannot bear to be a month behind the fashion Similarly I find that I have tried in these pages to express the real objection to philanthropists and have not succeeded. I have not seen the quite simple objection to the causes advocated by certain wealthy idealists; causes of which the cause called teetotalism is the strongest case.