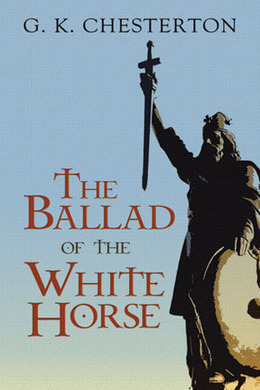 The Ballad of the White Horse

The Ballad of the White Horse is one of the last great epic poems in the English language. On the one hand it describes King Alfred’s battle against the Danes in 878. On the other hand it is a timeless allegory about the ongoing battle between Christianity and the forces of nihilistic heathenism. Filled with colorful characters, thrilling battles and mystical visions, it is as lively as it is profound. Chesterton incorporates brilliant imagination, atmosphere, moral concern, chronological continuity, wisdom and fancy. He makes his stanzas reverberate with sound, and hurries his readers into the heart of the battle.

Age beyond age on British land, Aeons on aeons gone, Was peace and war in western hills, And the White Horse looked on.

For the White Horse knew England When there was none to know; He saw the first oar break or bend, He saw heaven fall and the world end, O God, how long ago.

For the end of the world was long ago, And all we dwell to-day As children of some second birth, Like a strange people left on earth After a judgment day.

For the end of the world was long ago, When the ends of the world waxed free, When Rome was sunk in a waste of slaves, And the sun drowned in the sea.

When Caesar’s sun fell out of the sky And whoso hearkened right Could only hear the plunging Of the nations in the night.

When the ends of the earth came marching in To torch and cresset gleam. And the roads of the world that lead to Rome Were filled with faces that moved like foam, Like faces in a dream.

And men rode out of the eastern lands, Broad river and burning plain; Trees that are Titan flowers to see, And tiger skies, striped horribly, With tints of tropic rain.

Where Ind’s enamelled peaks arise Around that inmost one, Where ancient eagles on its brink, Vast as archangels, gather and drink The sacrament of the sun.

And men brake out of the northern lands, Enormous lands alone, Where a spell is laid upon life and lust And the rain is changed to a silver dust And the sea to a great green stone.

And a Shape that moveth murkily In mirrors of ice and night, Hath blanched with fear all beasts and birds, As death and a shock of evil words Blast a man’s hair with white.

And the cry of the palms and the purple moons, Or the cry of the frost and foam, Swept ever around an inmost place, And the din of distant race on race Cried and replied round Rome.

And there was death on the Emperor And night upon the Pope: And Alfred, hiding in deep grass, Hardened his heart with hope.

A sea-folk blinder than the sea Broke all about his land, But Alfred up against them bare And gripped the ground and grasped the air, Staggered, and strove to stand.

He bent them back with spear and spade, With desperate dyke and wall, With foemen leaning on his shield And roaring on him when he reeled; And no help came at all.

He broke them with a broken sword A little towards the sea, And for one hour of panting peace, Ringed with a roar that would not cease, With golden crown and girded fleece Made laws under a tree.

The Northmen came about our land A Christless chivalry: Who knew not of the arch or pen, Great, beautiful half-witted men From the sunrise and the sea.

Misshapen ships stood on the deep Full of strange gold and fire, And hairy men, as huge as sin With horned heads, came wading in Through the long, low sea-mire.

Our towns were shaken of tall kings With scarlet beards like blood: The world turned empty where they trod, They took the kindly cross of God And cut it up for wood.

Their souls were drifting as the sea, And all good towns and lands They only saw with heavy eyes, And broke with heavy hands,

Their gods were sadder than the sea, Gods of a wandering will, Who cried for blood like beasts at night, Sadly, from hill to hill.

They seemed as trees walking the earth, As witless and as tall, Yet they took hold upon the heavens And no help came at all.

They bred like birds in English woods, They rooted like the rose, When Alfred came to Athelney To hide him from their bows

There was not English armour left, Nor any English thing, When Alfred came to Athelney To be an English king.

For earthquake swallowing earthquake Uprent the Wessex tree; The whirlpool of the pagan sway Had swirled his sires as sticks away When a flood smites the sea.

And the great kings of Wessex Wearied and sank in gore, And even their ghosts in that great stress Grew greyer and greyer, less and less, With the lords that died in Lyonesse And the king that comes no more.

And if ever he climbed the crest of luck And set the flag before, Returning as a wheel returns, Came ruin and the rain that burns, And all began once more.

And naught was left King Alfred But shameful tears of rage, In the island in the river In the end of all his age.