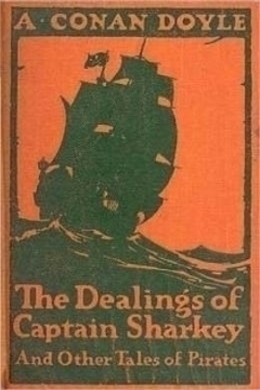 And Other Tales of Pirates

Careening was a very necessary operation for the old pirate. On his superior speed he depended both for overhauling the trader and escaping the man-of-war. But it was impossible to retain his sailing qualities unless he periodically–once a year, at the least–cleared his vessel’s bottom from the long, trailing plants and crusting barnacles which gather so rapidly in the tropical seas. For this purpose he lightened his vessel, thrust her into some narrow inlet where she would be left high and dry at low water, fastened blocks and tackles to her masts to pull her over on to her bilge, and then scraped her thoroughly from rudder-post to cutwater.

When the great wars of the Spanish Succession had been brought to an end by the Treaty of Utrecht, the vast number of privateers which had been fitted out by the contending parties found their occupation gone. Some took to the more peaceful but less lucrative ways of ordinary commerce, others were absorbed into the fishing-fleets, and a few of the more reckless hoisted the Jolly Rodger at the mizzen and the bloody flag at the main, declaring a private war upon their own account against the whole human race.

With mixed crews, recruited from every nation they scoured the seas, disappearing occasionally to careen in some lonely inlet, or putting in for a debauch at some outlaying port, where they dazzled the inhabitants by their lavishness and horrified them by their brutalities.

On the Coromandel Coast, at Madagascar, in the African waters, and above all in the West Indian and American seas, the pirates were a constant menace. With an insolent luxury they would regulate their depredations by the comfort of the seasons, harrying New England in the summer and dropping south again to the tropical islands in the winter.

They were the more to be dreaded because they had none of that discipline and restraint which made their predecessors, the Buccaneers, both formidable and respectable. These Ishmaels of the sea rendered an account to no man, and treated their prisoners according to the drunken whim of the moment. Flashes of grotesque generosity alternated with longer stretches of inconceivable ferocity, and the skipper who fell into their hands might find himself dismissed with his cargo, after serving as boon companion in some hideous debauch, or might sit at his cabin table with his own nose and his lips served up with pepper and salt in front of him. It took a stout seaman in those days to ply his calling in the Caribbean Gulf.

Such a man was Captain John Scarrow, of the ship Morning Star, and yet he breathed a long sigh of relief when he heard the splash of the falling anchor and swung at his moorings within a hundred yards of the guns of the citadel of Basseterre. St. Kitt’s was his final port of call, and early next morning his bowsprit would be pointed for Old England. He had had enough of those robber-haunted seas. Ever since he had left Maracaibo upon the Main, with his full lading of sugar and red pepper, he had winced at every topsail which glimmered over the violet edge of the tropical sea. He had coasted up the Windward Islands, touching here and there, and assailed continually by stories of villainy and outrage.

Captain Sharkey, of the 20-gun pirate barque, Happy Delivery, had passed down the coast, and had littered it with gutted vessels and with murdered men. Dreadful anecdotes were current of his grim pleasantries and of his inflexible ferocity. From the Bahamas to the Main his coal-black barque, with the ambiguous name, had been freighted with death and many things which are worse than death. So nervous was Captain Scarrow, with his new full-rigged ship and her full and valuable lading, that he struck out to the west as far as Bird’s Island to be out of the usual track of commerce. And yet even in those solitary waters he had been unable to shake off sinister traces of Captain Sharkey.

One morning they had raised a single skiff adrift upon the face of the ocean. Its only occupant was a delirious seaman, who yelled hoarsely as they hoisted him aboard, and showed a dried-up tongue like a black and wrinkled fungus at the back of his mouth. Water and nursing soon transformed him into the strongest and smartest sailor on the ship. He was from Marblehead, in New England, it seemed, and was the sole survivor of a schooner which had been scuttled by the dreadful Sharkey.

For a week Hiram Evanson, for that was his name, had been adrift beneath a tropical sun. Sharkey had ordered the mangled remains of his late captain to be thrown into the boat, “as provisions for the voyage,” but the seaman had at once committed them to the deep, lest the temptation should be more than he could bear. He had lived upon his own huge frame, until, at the last moment, the Morning Star had found him in that madness which is the precursor of such a death. It was no bad find for Captain Scarrow, for, with a short-handed crew, such a seaman as this big New Englander was a prize worth having. He vowed that he was the only man whom Captain Sharkey had ever placed under an obligation.

Now that they lay under the guns of Basseterre, all danger from the pirate was at an end, and yet the thought of him lay heavily upon the seaman’s mind as he watched the agent’s boat shooting out from the custom-house quay.

“I’ll lay you a wager, Morgan,” said he to the first mate, “that the agent will speak of Sharkey in the first hundred words that pass his lips.”