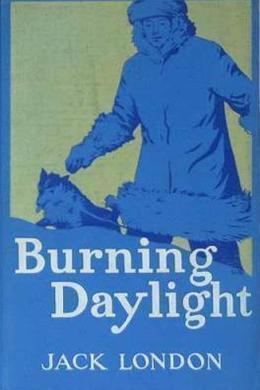 Burning Daylight is a novel by Jack London which was one of the best-selling books of that year and it was London’s best-selling book in his lifetime. The novel takes place in the Yukon Territory in 1893. The main character, nicknamed ‘Burning Daylight’ was the most successful entrepreneur of the Alaskan Gold Rush. The story of an adventurer who went to Alaska and laid the foundations of his fortune before the gold hunters arrived. Bringing his fortunes to the States he is cheated out of it by a crowd of money kings, and recovers it only at the muzzle of his gun. He then starts out as a merciless exploiter on his own account. Finally he takes to drinking and becomes a picture of degeneration. About this time he falls in love with his stenographer and wins her heart but not her hand and then–but read the story!

It was a quiet night in the Shovel. At the bar, which ranged along one side of the large chinked-log room, leaned half a dozen men, two of whom were discussing the relative merits of spruce-tea and lime-juice as remedies for scurvy. They argued with an air of depression and with intervals of morose silence. The other men scarcely heeded them. In a row, against the opposite wall, were the gambling games. The crap-table was deserted. One lone man was playing at the faro-table. The roulette-ball was not even spinning, and the gamekeeper stood by the roaring, red-hot stove, talking with the young, dark-eyed woman, comely of face and figure, who was known from Juneau to Fort Yukon as the Virgin. Three men sat in at stud-poker, but they played with small chips and without enthusiasm, while there were no onlookers. On the floor of the dancing-room, which opened out at the rear, three couples were waltzing drearily to the strains of a violin and a piano.

Circle City was not deserted, nor was money tight. The miners were in from Moseyed Creek and the other diggings to the west, the summer washing had been good, and the men’s pouches were heavy with dust and nuggets. The Klondike had not yet been discovered, nor had the miners of the Yukon learned the possibilities of deep digging and wood-firing. No work was done in the winter, and they made a practice of hibernating in the large camps like Circle City during the long Arctic night. Time was heavy on their hands, their pouches were well filled, and the only social diversion to be found was in the saloons. Yet the Shovel was practically deserted, and the Virgin, standing by the stove, yawned with uncovered mouth and said to Charley Bates:–

“If something don’t happen soon, I’m gin’ to bed. What’s the matter with the camp, anyway? Everybody dead?”

Bates did not even trouble to reply, but went on moodily rolling a cigarette. Dan MacDonald, pioneer saloonman and gambler on the upper Yukon, owner and proprietor of the Tivoli and all its games, wandered forlornly across the great vacant space of floor and joined the two at the stove.

“Anybody dead?” the Virgin asked him.

“Then it must be the whole camp,” she said with an air of finality and with another yawn.

MacDonald grinned and nodded, and opened his mouth to speak, when the front door swung wide and a man appeared in the light. A rush of frost, turned to vapor by the heat of the room, swirled about him to his knees and poured on across the floor, growing thinner and thinner, and perishing a dozen feet from the stove. Taking the wisp broom from its nail inside the door, the newcomer brushed the snow from his moccasins and high German socks. He would have appeared a large man had not a huge French-Canadian stepped up to him from the bar and gripped his hand.

“Hello, Daylight!” was his greeting. “By Gar, you good for sore eyes!”

“Hello, Louis, when did you-all blow in?” returned the newcomer. “Come up and have a drink and tell us all about Bone Creek. Why, dog-gone you-all, shake again. Where’s that pardner of yours? I’m looking for him.”

Another huge man detached himself from the bar to shake hands. Olaf Henderson and French Louis, partners together on Bone Creek, were the two largest men in the country, and though they were but half a head taller than the newcomer, between them he was dwarfed completely.

The arrival of the newcomer seemed to send a flood of warmth through the place. “It’s Burning Daylight,” the Virgin cried, the first to recognize him as he came into the light. Charley Bates’ tight features relaxed at the sight, and MacDonald went over and joined the three at the bar. With the advent of Burning Daylight the whole place became suddenly brighter and cheerier. The barkeepers were active. Voices were raised. Somebody laughed. And when the fiddler, peering into the front room, remarked to the pianist, “It’s Burning Daylight,” the waltz-time perceptibly quickened, and the dancers, catching the contagion, began to whirl about as if they really enjoyed it. It was known to them of old time that nothing languished when Burning Daylight was around.

He turned from the bar and saw the woman by the stove and the eager look of welcome she extended him.