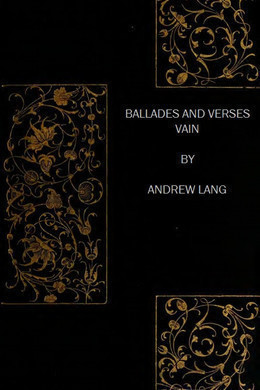 Selected by Austin Dobson from Ballads and Lyrics of Old France, Ballades in Blue China, and from verses previously unprinted or not collected.

The painted Briton built his mound, And left his celts and clay, On yon fair slope of sunlit ground That fronts your garden gay; The Roman came, he bore the sway, He bullied, bought, and sold, Your fountain sweeps his works away Beside your manor old!

But still his crumbling urns are found Within the window-bay, Where once he listened to the sound That lulls you day by day;– The sound of summer winds at play, The noise of waters cold To Yarty wandering on their way, Beside your manor old!

The Roman fell: his firm-set bound Became the Saxon’s stay; The bells made music all around For monks in cloisters grey, Till fled the monks in disarray From their warm chantry’s fold, The Abbots slumber as they may, Beside your manor old!

Creeds, empires, peoples, all decay, Down into darkness, rolled; May life that’s fleet be sweet, I pray, Beside your manor old!

“All these for Fourpence.”

Oh, where are the endless Romances Our grandmothers used to adore? The Knights with their helms and their lances, Their shields and the favours they wore? And the Monks with their magical lore? They have passed to Oblivion and Nox They have fled to the shadowy shore,– They are all in the Fourpenny Box!

And where the poetical fancies Our fathers were fond of, of yore? The lyric’s melodious expanses, The Epics in cantos a score? They have been and are not: no more Shall the shepherds drive silvery flocks, Nor the ladies their long words deplore,– They are all in the Fourpenny Box!

And the Music! The songs and the dances? The tunes that Time may not restore? And the tomes where Divinity prances? And the pamphlets where Heretics roar? They have ceased to be even a bore,– The Divine, and the Sceptic who mocks,– They are “cropped,” they are “foxed” to core,– They are all in the Fourpenny Box!

Suns beat on them; tempests downpour, On the chest without cover or locks, Where they lie by the Bookseller’s door,– They are all in the Fourpenny Box!

There’s a joy without canker or cark, There’s a pleasure eternally new, ‘T is to gloat on the glaze and the mark Of china that’s ancient and blue; Unchipp’d, all the centuries through It has pass’d, since the chime of it rang, And they fashion’d it, figure and hue, In the reign of the Emperor Hwang.

These dragons (their tails, you remark, Into bunches of gillyflowers grew),– When Noah came out of the ark, Did these lie in wait for his crew? They snorted, they snapp’d, and they slew, They were mighty of fin and of fang, And their portraits Celestials drew In the reign of the Emperor Hwangs.

Here’s a pot with a cot in a park, In a park where the peach-blossoms blew, Where the lovers eloped in the dark, Lived, died, and were changed into two Bright birds that eternally flew Through the boughs of the may, as they sang; ‘T is a tale was undoubtedly true In the reign of the Emperor Hwang.

Come, snarl at my ecstasies, do, Kind critic; your “tongue has a tang,” But–a sage never heeded a shrew In the reign of the Emperor Hwang.

In torrid heats of late July, In March, beneath the bitter bise, He book-hunts while the loungers fly,– He book-hunts, though December freeze; In breeches baggy at the knees, And heedless of the public jeers, For these, for these, he hoards his fees,– Aldines, Bodonis, Elzevirs.

No dismal stall escapes his eye, He turns o’er tomes of low degrees, There soiled romanticists may lie, Or Restoration comedies; Each tract that flutters in the breeze For him is charged with hopes and fears, In mouldy novels fancy sees Aldines, Bodonis, Elzevirs.

With restless eyes that peer and spy, Sad eyes that heed not skies nor trees, In dismal nooks he loves to pry, Whose motto ever more is Spes! But ah! the fabled treasure flees; Grown rarer with the fleeting years, In rich men’s shelves they take their ease,– Aldines, Bodonis, Elzevirs!

Prince, all the things that tease and please,– Fame, hope, wealth, kisses, cheers, and tears, What are they but such toys as these– Aldines, Bodonis, Elzevirs?