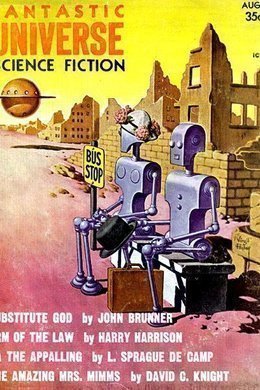 Arm of the Law

In the mood for a thought-provoking read from the golden age of science fiction? Dip into Arm of the Law from mid-century SF virtuoso Harry Harrison. In this tale, Harrison recounts an experiment in robotic law enforcement that goes awry – with an array of horrifying unforeseen consequences.

It was a big, coffin-shaped plywood box that looked like it weighed a ton. This brawny type just dumped it through the door of the police station and started away. I looked up from the blotter and shouted at the trucker’s vanishing back.

“What the hell is that?”

“How should I know?” he said as he swung up into the cab. “I just deliver, I don’t X-ray ‘em. It came on the morning rocket from earth is all I know.” He gunned the truck more than he had to and threw up a billowing cloud of red dust.

“Jokers,” I growled to myself. “Mars is full of jokers.”

When I went over to look at the box I could feel the dust grate between my teeth. Chief Craig must have heard the racket because he came out of his office and helped me stand and look at the box.

“Think it’s a bomb?” he asked in a bored voice.

“Why would anyone bother–particularly with a thing this size? And all the way from earth.”

He nodded agreement and walked around to look at the other end. There was no sender’s address anywhere on the outside. Finally we had to dig out the crowbar and I went to work on the top. After some prying it pulled free and fell off.

That was when we had our first look at Ned. We all would have been a lot happier if it had been our last look as well. If we had just put the lid back on and shipped the thing back to earth! I know now what they mean about Pandora’s Box.

But we just stood there and stared like a couple of rubes. Ned lay motionless and stared back at us.

“Very observant; it’s easy to see you went to the police academy.”

I hadn’t gone to the academy, but this was no handicap to my finding the letter. It was sticking up out of a thick book in a pocket in the box. The Chief took the letter and read it with little enthusiasm.

“Well, well! United Robotics have the brainstorm that … robots, correctly used will tend to prove invaluable in police work … they want us to co-operate in a field test … robot enclosed is the latest experimental model; valued at 120,000 credits.”

We both looked back at the robot, sharing the wish that the credits had been in the box instead of it. The Chief frowned and moved his lips through the rest of the letter. I wondered how we got the robot out of its plywood coffin.

Experimental model or not, this was a nice-looking hunk of machinery. A uniform navy-blue all over, though the outlet cases, hooks and such were a metallic gold. Someone had gone to a lot of trouble to get that effect. This was as close as a robot could look to a cop in uniform, without being a joke. All that seemed to be missing was the badge and gun.

Then I noticed the tiny glow of light in the robot’s eye lenses. It had never occurred to me before that the thing might be turned on. There was nothing to lose by finding out.

The robot came up smooth and fast as a rocket, landing two feet in front of me and whipping out a snappy salute.

His voice quivered with alertness and I could almost hear the humming of those taut cable muscles. He may have had a stainless steel hide and a bunch of wires for a brain–but he spelled rookie cop to me just the same. The fact that he was man-height with two arms, two legs and that painted-on uniform helped. All I had to do was squint my eyes a bit and there stood Ned the Rookie Cop. Fresh out of school and raring to go. I shook my head to get rid of the illusion. This was just six feet of machine that boffins and brain-boys had turned out for their own amusement.

“Relax, Ned,” I said. He was still holding the salute. “At ease. You’ll get a hernia of your exhaust pipe if you stay so tense. Anyways, I’m just the sergeant here. That’s the Chief of Police over there.”

Ned did an about face and slid over to the Chief with that same greased-lightning motion. The Chief just looked at him like something that sprang out from under the hood of a car, while Ned went through the same report routine.

“I wonder if it does anything else beside salute and report,” the Chief said while he walked around the robot, looking it over like a dog with a hydrant.

“The functions, operations and responsible courses of action open to the Police Experimental Robots are outlined on pages 184 to 213 of the manual.” Ned’s voice was muffled for a second while he half-dived back into his case and came up with the volume mentioned. “A detailed breakdown of these will also be found on pages 1035 to 1267 inclusive.”

The Chief, who has trouble reading an entire comic page at one sitting, turned the 6-inch-thick book over in his hands like it would maybe bite him. When he had a rough idea of how much it weighed and a good feel of the binding he threw it on my desk.