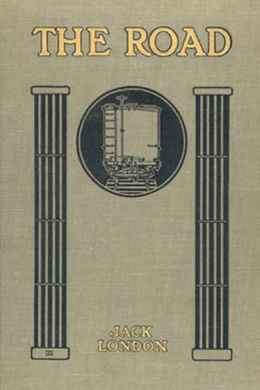 In this entertaining collection of tales and autobiographical essays, London relates the days he spent on the road. Each story details an aspect of the hobo’s life – from catching a train to cadging a meal. The wealth of experiences and the necessity of having to lie for a living brought depth London’s subsequent stories.

There is a woman in the state of Nevada to whom I once lied continuously, consistently, and shamelessly, for the matter of a couple of hours. I don’t want to apologize to her. Far be it from me. But I do want to explain. Unfortunately, I do not know her name, much less her present address. If her eyes should chance upon these lines, I hope she will write to me.

It was in Reno, Nevada, in the summer of 1892. Also, it was fair-time, and the town was filled with petty crooks and tin-horns, to say nothing of a vast and hungry horde of hoboes. It was the hungry hoboes that made the town a “hungry” town. They “battered” the back doors of the homes of the citizens until the back doors became unresponsive.

A hard town for “scoffings,” was what the hoboes called it at that time. I know that I missed many a meal, in spite of the fact that I could “throw my feet” with the next one when it came to “slamming a gate” for a “poke-out” or a “set-down,” or hitting for a “light piece” on the street. Why, I was so hard put in that town, one day, that I gave the porter the slip and invaded the private car of some itinerant millionnaire. The train started as I made the platform, and I headed for the aforesaid millionnaire with the porter one jump behind and reaching for me. It was a dead heat, for I reached the millionnaire at the same instant that the porter reached me. I had no time for formalities. “Gimme a quarter to eat on,” I blurted out. And as I live, that millionnaire dipped into his pocket and gave me … just …precisely … a quarter. It is my conviction that he was so flabbergasted that he obeyed automatically, and it has been a matter of keen regret ever since, on my part, that I didn’t ask him for a dollar. I know that I’d have got it. I swung off the platform of that private car with the porter manoeuvring to kick me in the face. He missed me. One is at a terrible disadvantage when trying to swing off the lowest step of a car and not break his neck on the right of way, with, at the same time, an irate Ethiopian on the platform above trying to land him in the face with a number eleven. But I got the quarter! I got it!

But to return to the woman to whom I so shamelessly lied. It was in the evening of my last day in Reno. I had been out to the race-track watching the ponies run, and had missed my dinner (i.e. the mid-day meal). I was hungry, and, furthermore, a committee of public safety had just been organized to rid the town of just such hungry mortals as I. Already a lot of my brother hoboes had been gathered in by John Law, and I could hear the sunny valleys of California calling to me over the cold crests of the Sierras. Two acts remained for me to perform before I shook the dust of Reno from my feet. One was to catch the blind baggage on the westbound overland that night. The other was first to get something to eat. Even youth will hesitate at an all-night ride, on an empty stomach, outside a train that is tearing the atmosphere through the snow-sheds, tunnels, and eternal snows of heaven-aspiring mountains.

But that something to eat was a hard proposition. I was “turned down” at a dozen houses. Sometimes I received insulting remarks and was informed of the barred domicile that should be mine if I had my just deserts. The worst of it was that such assertions were only too true. That was why I was pulling west that night. John Law was abroad in the town, seeking eagerly for the hungry and homeless, for by such was his barred domicile tenanted.

At other houses the doors were slammed in my face, cutting short my politely and humbly couched request for something to eat. At one house they did not open the door. I stood on the porch and knocked, and they looked out at me through the window. They even held one sturdy little boy aloft so that he could see over the shoulders of his elders the tramp who wasn’t going to get anything to eat at their house.

It began to look as if I should be compelled to go to the very poor for my food. The very poor constitute the last sure recourse of the hungry tramp. The very poor can always be depended upon. They never turn away the hungry. Time and again, all over the United States, have I been refused food by the big house on the hill; and always have I received food from the little shack down by the creek or marsh, with its broken windows stuffed with rags and its tired-faced mother broken with labor. Oh, you charity-mongers! Go to the poor and learn, for the poor alone are the charitable. They neither give nor withhold from their excess. They have no excess. They give, and they withhold never, from what they need for themselves, and very often from what they cruelly need for themselves. A bone to the dog is not charity. Charity is the bone shared with the dog when you are just as hungry as the dog.