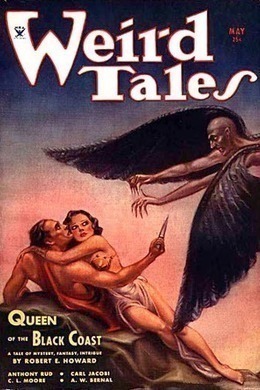 Queen of the Black Coast

Queen of the Black Coast is one of the original short stories about Conan the Cimmerian, written by American author Robert E. Howard and first published in Weird Tales magazine. It is set in the pseudo-historical Hyborian Age and concerns Conan becoming a notorious pirate and plundering the coastal villages of Kush alongside Bêlit, a head-strong femme fatale. Due to its epic scope and atypical romance, the story is considered an undisputed classic of Conan lore and is often cited by Howard scholars as one of his most famous tales.

Hoofs drummed down the street that sloped to the wharfs. The folk that yelled and scattered had only a fleeting glimpse of a mailed figure on a black stallion, a wide scarlet cloak flowing out on the wind. Far up the street came the shout and clatter of pursuit, but the horseman did not look back. He swept out onto the wharfs and jerked the plunging stallion back on its haunches at the very lip of the pier. Seamen gaped up at him, as they stood to the sweep and striped sail of a high-prowed, broad-waisted galley. The master, sturdy and black-bearded, stood in the bows, easing her away from the piles with a boat-hook. He yelled angrily as the horseman sprang from the saddle and with a long leap landed squarely on the mid-deck.

‘Who invited you aboard?’

‘Get under way!’ roared the intruder with a fierce gesture that spattered red drops from his broadsword.

‘But we’re bound for the coasts of Kush!’ expostulated the master.

‘Then I’m for Kush! Push off, I tell you!’ The other cast a quick glance up the street, along which a squad of horsemen were galloping; far behind them toiled a group of archers, crossbows on their shoulders.

‘Can you pay for your passage?’ demanded the master.

‘I pay my way with steel!’ roared the man in armor, brandishing the great sword that glittered bluely in the sun. ‘By Crom, man, if you don’t get under way, I’ll drench this galley in the blood of its crew!’

The shipmaster was a good judge of men. One glance at the dark scarred face of the swordsman, hardened with passion, and he shouted a quick order, thrusting strongly against the piles. The galley wallowed out into clear water, the oars began to clack rhythmically; then a puff of wind filled the shimmering sail, the light ship heeled to the gust, then took her course like a swan, gathering headway as she skimmed along.

On the wharfs the riders were shaking their swords and shouting threats and commands that the ship put about, and yelling for the bowmen to hasten before the craft was out of arbalest range.

‘Let them rave,’ grinned the swordsman hardily. ‘Do you keep her on her course, master steersman.’

The master descended from the small deck between the bows, made his way between the rows of oarsmen, and mounted the mid-deck. The stranger stood there with his back to the mast, eyes narrowed alertly, sword ready. The shipman eyed him steadily, careful not to make any move toward the long knife in his belt. He saw a tall powerfully built figure in a black scale-mail hauberk, burnished greaves and a blue-steel helmet from which jutted bull’s horns highly polished. From the mailed shoulders fell the scarlet cloak, blowing in the sea-wind. A broad shagreen belt with a golden buckle held the scabbard of the broadsword he bore. Under the horned helmet a square-cut black mane contrasted with smoldering blue eyes.

‘If we must travel together,’ said the master, ‘we may as well be at peace with each other. My name is Tito, licensed master-shipman of the ports of Argos. I am bound for Kush, to trade beads and silks and sugar and brass-hilted swords to the black kings for ivory, copra, copper ore, slaves and pearls.’

The swordsman glanced back at the rapidly receding docks, where the figures still gesticulated helplessly, evidently having trouble in finding a boat swift enough to overhaul the fast-sailing galley.

‘I am Conan, a Cimmerian,’ he answered. ‘I came into Argos seeking employment, but with no wars forward, there was nothing to which I might turn my hand.’

‘Why do the guardsmen pursue you?’ asked Tito. ‘Not that it’s any of my business, but I thought perhaps—-‘

‘I’ve nothing to conceal,’ replied the Cimmerian. ‘By Crom, though I’ve spent considerable time among you civilized peoples, your ways are still beyond my comprehension.

‘Well, last night in a tavern, a captain in the king’s guard offered violence to the sweetheart of a young soldier, who naturally ran him through. But it seems there is some cursed law against killing guardsmen, and the boy and his girl fled away. It was bruited about that I was seen with them, and so today I was haled into court, and a judge asked me where the lad had gone. I replied that since he was a friend of mine, I could not betray him. Then the court waxed wrath, and the judge talked a great deal about my duty to the state, and society, and other things I did not understand, and bade me tell where my friend had flown. By this time I was becoming wrathful myself, for I had explained my position.