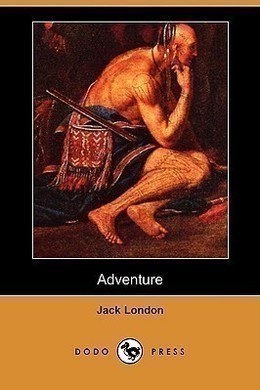 This novel, a devastating portrayal of colonialism and slavery set in the Solomon Islands, has generated considerable controversy since its publication over the question of whether London shared the racist beliefs of his characters or, on the contrary, was merely presenting them accurately.

He was a very sick white man. He rode pick-a-back on a woolly-headed, black-skinned savage, the lobes of whose ears had been pierced and stretched until one had torn out, while the other carried a circular block of carved wood three inches in diameter. The torn ear had been pierced again, but this time not so ambitiously, for the hole accommodated no more than a short clay pipe. The man-horse was greasy and dirty, and naked save for an exceedingly narrow and dirty loin-cloth; but the white man clung to him closely and desperately. At times, from weakness, his head drooped and rested on the woolly pate. At other times he lifted his head and stared with swimming eyes at the cocoanut palms that reeled and swung in the shimmering heat. He was clad in a thin undershirt and a strip of cotton cloth, that wrapped about his waist and descended to his knees. On his head was a battered Stetson, known to the trade as a Baden-Powell. About his middle was strapped a belt, which carried a large-calibred automatic pistol and several spare clips, loaded and ready for quick work.

The rear was brought up by a black boy of fourteen or fifteen, who carried medicine bottles, a pail of hot water, and various other hospital appurtenances. They passed out of the compound through a small wicker gate, and went on under the blazing sun, winding about among new-planted cocoanuts that threw no shade. There was not a breath of wind, and the superheated, stagnant air was heavy with pestilence. From the direction they were going arose a wild clamour, as of lost souls wailing and of men in torment. A long, low shed showed ahead, grass-walled and grass-thatched, and it was from here that the noise proceeded. There were shrieks and screams, some unmistakably of grief, others unmistakably of unendurable pain. As the white man drew closer he could hear a low and continuous moaning and groaning. He shuddered at the thought of entering, and for a moment was quite certain that he was going to faint. For that most dreaded of Solomon Island scourges, dysentery, had struck Berande plantation, and he was all alone to cope with it. Also, he was afflicted himself.

By stooping close, still on man-back, he managed to pass through the low doorway. He took a small bottle from his follower, and sniffed strong ammonia to clear his senses for the ordeal. Then he shouted, “Shut up!” and the clamour stilled. A raised platform of forest slabs, six feet wide, with a slight pitch, extended the full length of the shed. Alongside of it was a yard-wide run-way. Stretched on the platform, side by side and crowded close, lay a score of blacks. That they were low in the order of human life was apparent at a glance. They were man-eaters. Their faces were asymmetrical, bestial; their bodies were ugly and ape- like. They wore nose-rings of clam-shell and turtle-shell, and from the ends of their noses which were also pierced, projected horns of beads strung on stiff wire. Their ears were pierced and distended to accommodate wooden plugs and sticks, pipes, and all manner of barbaric ornaments. Their faces and bodies were tattooed or scarred in hideous designs. In their sickness they wore no clothing, not even loin-cloths, though they retained their shell armlets, their bead necklaces, and their leather belts, between which and the skin were thrust naked knives. The bodies of many were covered with horrible sores. Swarms of flies rose and settled, or flew back and forth in clouds.

The white man went down the line, dosing each man with medicine. To some he gave chlorodyne. He was forced to concentrate with all his will in order to remember which of them could stand ipecacuanha, and which of them were constitutionally unable to retain that powerful drug. One who lay dead he ordered to be carried out. He spoke in the sharp, peremptory manner of a man who would take no nonsense, and the well men who obeyed his orders scowled malignantly. One muttered deep in his chest as he took the corpse by the feet. The white man exploded in speech and action. It cost him a painful effort, but his arm shot out, landing a back-hand blow on the black’s mouth.

“What name you, Angara?” he shouted. “What for talk ‘long you, eh? I knock seven bells out of you, too much, quick!”

With the automatic swiftness of a wild animal the black gathered himself to spring. The anger of a wild animal was in his eyes; but he saw the white man’s hand dropping to the pistol in his belt. The spring was never made. The tensed body relaxed, and the black, stooping over the corpse, helped carry it out. This time there was no muttering.

“Swine!” the white man gritted out through his teeth at the whole breed of Solomon Islanders.