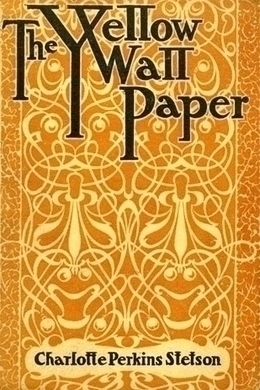 The Yellow Wall-Paper is written as the secret journal of a woman who, failing to relish the joys of marriage and motherhood, is sentenced to a country rest cure. Though she longs to write, her husband and doctor forbid it, prescribing instead complete passivity. In the involuntary confinement of her bedroom, the hero creates a reality of her own beyond the hypnotic pattern of the faded yellow wallpaper – a pattern that has come to symbolize her own imprisonment. Narrated with superb psychological and dramatic precision, The Yellow Wall-Paper stands out not only for the imaginative authenticity with which it depicts one woman’s descent into insanity, but also for the power of its testimony to the importance of freedom and self-empowerment for women.

It is very seldom that mere ordinary people like John and myself secure ancestral halls for the summer.

A colonial mansion, a hereditary estate, I would say a haunted house, and reach the height of romantic felicity–but that would be asking too much of fate!

Still I will proudly declare that there is something queer about it.

Else, why should it be let so cheaply? And why have stood so long untenanted?

John laughs at me, of course, but one expects that in marriage.

John is practical in the extreme. He has no patience with faith, an intense horror of superstition, and he scoffs openly at any talk of things not to be felt and seen and put down in figures.

John is a physician, and PERHAPS–(I would not say it to a living soul, of course, but this is dead paper and a great relief to my mind)–PERHAPS that is one reason I do not get well faster.

You see he does not believe I am sick!

And what can one do?

If a physician of high standing, and one’s own husband, assures friends and relatives that there is really nothing the matter with one but temporary nervous depression–a slight hysterical tendency–what is one to do?

My brother is also a physician, and also of high standing, and he says the same thing.

So I take phosphates or phosphites–whichever it is, and tonics, and journeys, and air, and exercise, and am absolutely forbidden to “work” until I am well again.

Personally, I disagree with their ideas.

Personally, I believe that congenial work, with excitement and change, would do me good.

But what is one to do?

I did write for a while in spite of them; but it DOES exhaust me a good deal–having to be so sly about it, or else meet with heavy opposition.

I sometimes fancy that in my condition if I had less opposition and more society and stimulus–but John says the very worst thing I can do is to think about my condition, and I confess it always makes me feel bad.

So I will let it alone and talk about the house.

The most beautiful place! It is quite alone, standing well back from the road, quite three miles from the village. It makes me think of English places that you read about, for there are hedges and walls and gates that lock, and lots of separate little houses for the gardeners and people.

There is a DELICIOUS garden! I never saw such a garden–large and shady, full of box-bordered paths, and lined with long grape-covered arbors with seats under them.

There were greenhouses, too, but they are all broken now.

There was some legal trouble, I believe, something about the heirs and coheirs; anyhow, the place has been empty for years.

That spoils my ghostliness, I am afraid, but I don’t care–there is something strange about the house–I can feel it.

I even said so to John one moonlight evening, but he said what I felt was a DRAUGHT, and shut the window.

I get unreasonably angry with John sometimes. I’m sure I never used to be so sensitive. I think it is due to this nervous condition.

But John says if I feel so, I shall neglect proper self-control; so I take pains to control myself–before him, at least, and that makes me very tired.

I don’t like our room a bit. I wanted one downstairs that opened on the piazza and had roses all over the window, and such pretty old-fashioned chintz hangings! but John would not hear of it.

He said there was only one window and not room for two beds, and no near room for him if he took another.

He is very careful and loving, and hardly lets me stir without special direction.

I have a schedule prescription for each hour in the day; he takes all care from me, and so I feel basely ungrateful not to value it more.

He said we came here solely on my account, that I was to have perfect rest and all the air I could get. “Your exercise depends on your strength, my dear,” said he, “and your food somewhat on your appetite; but air you can absorb all the time.” So we took the nursery at the top of the house.

It is a big, airy room, the whole floor nearly, with windows that look all ways, and air and sunshine galore. It was nursery first and then playroom and gymnasium, I should judge; for the windows are barred for little children, and there are rings and things in the walls.

The paint and paper look as if a boys’ school had used it. It is stripped off–the paper–in great patches all around the head of my bed, about as far as I can reach, and in a great place on the other side of the room low down. I never saw a worse paper in my life.

One of those sprawling flamboyant patterns committing every artistic sin.

It is dull enough to confuse the eye in following, pronounced enough to constantly irritate and provoke study, and when you follow the lame uncertain curves for a little distance they suddenly commit suicide–plunge off at outrageous angles, destroy themselves in unheard of contradictions.