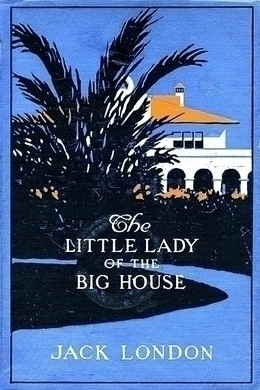 The Little Lady of the Big House

A triangle romance provides the basis for a questioning of the meaning of masculinity, as well as an examination of agribusiness in California. Jack London said of this novel: ‘It is all sex from start to finish – in which no sexual adventure is actually achieved or comes within a million miles of being achieved, and in which, nevertheless, is all the guts of sex, coupled with strength.’

He awoke in the dark. His awakening was simple, easy, without movement save for the eyes that opened and made him aware of darkness. Unlike most, who must feel and grope and listen to, and contact with, the world about them, he knew himself on the moment of awakening, instantly identifying himself in time and place and personality. After the lapsed hours of sleep he took up, without effort, the interrupted tale of his days. He knew himself to be Dick Forrest, the master of broad acres, who had fallen asleep hours before after drowsily putting a match between the pages of “Road Town” and pressing off the electric reading lamp.

Near at hand there was the ripple and gurgle of some sleepy fountain. From far off, so faint and far that only a keen ear could catch, he heard a sound that made him smile with pleasure. He knew it for the distant, throaty bawl of King Polo–King Polo, his champion Short Horn bull, thrice Grand Champion also of all bulls at Sacramento at the California State Fairs. The smile was slow in easing from Dick Forrest’s face, for he dwelt a moment on the new triumphs he had destined that year for King Polo on the Eastern livestock circuits. He would show them that a bull, California born and finished, could compete with the cream of bulls corn-fed in Iowa or imported overseas from the immemorial home of Short Horns.

Not until the smile faded, which was a matter of seconds, did he reach out in the dark and press the first of a row of buttons. There were three rows of such buttons. The concealed lighting that spilled from the huge bowl under the ceiling revealed a sleeping-porch, three sides of which were fine-meshed copper screen. The fourth side was the house wall, solid concrete, through which French windows gave access.

He pressed the second button in the row and the bright light concentered at a particular place on the concrete wall, illuminating, in a row, a clock, a barometer, and centigrade and Fahrenheit thermometers. Almost in a sweep of glance he read the messages of the dials: time 4:30; air pressure, 29:80, which was normal at that altitude and season; and temperature, Fahrenheit, 36°. With another press, the gauges of time and heat and air were sent back into the darkness.

A third button turned on his reading lamp, so arranged that the light fell from above and behind without shining into his eyes. The first button turned off the concealed lighting overhead. He reached a mass of proofsheets from the reading stand, and, pencil in hand, lighting a cigarette, he began to correct.

The place was clearly the sleeping quarters of a man who worked. Efficiency was its key note, though comfort, not altogether Spartan, was also manifest. The bed was of gray enameled iron to tone with the concrete wall. Across the foot of the bed, an extra coverlet, hung a gray robe of wolfskins with every tail a-dangle. On the floor, where rested a pair of slippers, was spread a thick-coated skin of mountain goat.

Heaped orderly with books, magazines and scribble-pads, there was room on the big reading stand for matches, cigarettes, an ash-tray, and a thermos bottle. A phonograph, for purposes of dictation, stood on a hinged and swinging bracket. On the wall, under the barometer and thermometers, from a round wooden frame laughed the face of a girl. On the wall, between the rows of buttons and a switchboard, from an open holster, loosely projected the butt of a .44 Colt’s automatic.

At six o’clock, sharp, after gray light had begun to filter through the wire netting, Dick Forrest, without raising his eyes from the proofsheets, reached out his right hand and pressed a button in the second row. Five minutes later a soft-slippered Chinese emerged on the sleeping-porch. In his hands he bore a small tray of burnished copper on which rested a cup and saucer, a tiny coffee pot of silver, and a correspondingly tiny silver cream pitcher.

“Good morning, Oh My,” was Dick Forrest’s greeting, and his eyes smiled and his lips smiled as he uttered it.

“Good morning, Master,” Oh My returned, as he busied himself with making room on the reading stand for the tray and with pouring the coffee and cream.

This done, without waiting further orders, noting that his master was already sipping coffee with one hand while he made a correction on the proof with the other, Oh My picked up a rosy, filmy, lacy boudoir cap from the floor and departed. His exit was noiseless. He ebbed away like a shadow through the open French windows.

At six-thirty, sharp to the minute, he was back with a larger tray. Dick Forrest put away the proofs, reached for a book entitled “Commercial Breeding of Frogs,” and prepared to eat. The breakfast was simple yet fairly substantial–more coffee, a half grape-fruit, two soft-boiled eggs made ready in a glass with a dab of butter and piping hot, and a sliver of bacon, not over-cooked, that he knew was of his own raising and curing.