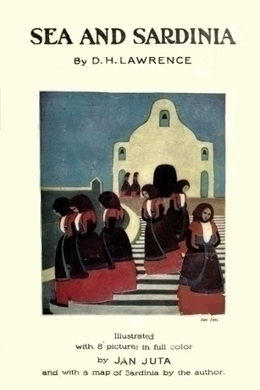 Written after the First World War when he was living in Sicily, Sea and Sardinia records Lawrence’s journey to Sardinia and back in January 1921. It reveals his delighted response to a new landscape and people, and his ability to transmute the spirit of place into literary art. Like his other travel writings, the book is also a shrewd enquiry into the political and social values of an era which saw the rise of communism and fascism. On one level an indictment of contemporary materialism, Sea and Sardinia is nevertheless an optimistic book, celebrating the creativity of the human spirit and seeking in the fundamental laws of human nature fresh inspiration for the present.

Comes over one an absolute necessity to move. And what is more, to move in some particular direction. A double necessity then: to get on the move, and to know whither.

Why can’t one sit still? Here in Sicily it is so pleasant: the sunny Ionian sea, the changing jewel of Calabria, like a fire-opal moved in the light; Italy and the panorama of Christmas clouds, night with the dog-star laying a long, luminous gleam across the sea, as if baying at us, Orion marching above; how the dog-star Sirius looks at one, looks at one! he is the hound of heaven, green, glamorous and fierce!–and then oh regal evening star, hung westward flaring over the jagged dark precipices of tall Sicily: then Etna, that wicked witch, resting her thick white snow under heaven, and slowly, slowly rolling her orange-coloured smoke. They called her the Pillar of Heaven, the Greeks. It seems wrong at first, for she trails up in a long, magical, flexible line from the sea’s edge to her blunt cone, and does not seem tall. She seems rather low, under heaven. But as one knows her better, oh awe and wizardy! Remote under heaven, aloof, so near, yet never with us. The painters try to paint her, and the photographers to photograph her, in vain. Because why? Because the near ridges, with their olives and white houses, these are with us. Because the river-bed, and Naxos under the lemon groves, Greek Naxos deep under dark-leaved, many-fruited lemon groves, Etna’s skirts and skirt-bottoms, these still are our world, our own world. Even the high villages among the oaks, on Etna. But Etna herself, Etna of the snow and secret changing winds, she is beyond a crystal wall. When I look at her, low, white, witch-like under heaven, slowly rolling her orange smoke and giving sometimes a breath of rose-red flame, then I must look away from earth, into the ether, into the low empyrean. And there, in that remote region, Etna is alone. If you would see her, you must slowly take off your eyes from the world and go a naked seer to the strange chamber of the empyrean. Pedestal of heaven! The Greeks had a sense of the magic truth of things. Thank goodness one still knows enough about them to find one’s kinship at last. There are so many photographs, there are so infinitely many water-colour drawings and oil paintings which purport to render Etna. But pedestal of heaven! You must cross the invisible border. Between the foreground, which is our own, and Etna, pivot of winds in lower heaven, there is a dividing line. You must change your state of mind. A metempsychosis. It is no use thinking you can see and behold Etna and the foreground both at once. Never. One or the other. Foreground and a transcribed Etna. Or Etna, pedestal of heaven.

Why, then, must one go? Why not stay? Ah, what a mistress, this Etna! with her strange winds prowling round her like Circe’s panthers, some black, some white. With her strange, remote communications and her terrible dynamic exhalations. She makes men mad. Such terrible vibrations of wicked and beautiful electricity she throws about her, like a deadly net! Nay, sometimes, verily, one can feel a new current of her demon magnetism seize one’s living tissue and change the peaceful life of one’s active cells. She makes a storm in the living plasm and a new adjustment. And sometimes it is like a madness.

This timeless Grecian Etna, in her lower-heaven loveliness, so lovely, so lovely, what a torturer! Not many men can really stand her, without losing their souls. She is like Circe. Unless a man is very strong, she takes his soul away from him and leaves him not a beast, but an elemental creature, intelligent and soulless. Intelligent, almost inspired, and soulless, like the Etna Sicilians. Intelligent daimons, and humanly, according to us, the most stupid people on earth. Ach, horror! How many men, how many races, has Etna put to flight? It was she who broke the quick of the Greek soul. And after the Greeks, she gave the Romans, the Normans, the Arabs, the Spaniards, the French, the Italians, even the English, she gave them all their inspired hour and broke their souls.

Perhaps it is she one must flee from. At any rate, one must go: and at once. After having come back only at the end of October, already one must dash away. And it is only the third of January. And one cannot afford to move. Yet there you are: at the Etna bidding one goes.