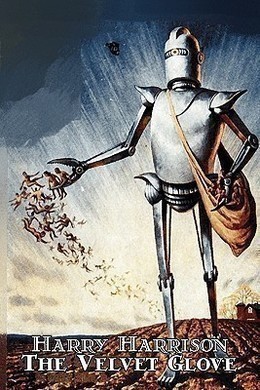 This classic short story from sci-fi luminary Harry Harrison offers a sympathetic glimpse into the inner lives of robots. In the future, society has grown ever more dependent on these super-intelligent machines, but despite their increasing autonomy, robots are still looked down on as second-class citizens. The Velvet Glove is a thought-provoking reversal of the conventional take on the issue of robots.

Jon Venex fitted the key into the hotel room door. He had asked for a large room, the largest in the hotel, and paid the desk clerk extra for it. All he could do now was pray that he hadn’t been cheated. He didn’t dare complain or try to get his money back. He heaved a sigh of relief as the door swung open, it was bigger than he had expected–fully three feet wide by five feet long. There was more than enough room to work in. He would have his leg off in a jiffy and by morning his limp would be gone.

There was the usual adjustable hook on the back wall. He slipped it through the recessed ring in the back of his neck and kicked himself up until his feet hung free of the floor. His legs relaxed with a rattle as he cut off all power from his waist down.

The overworked leg motor would have to cool down before he could work on it, plenty of time to skim through the newspaper. With the chronic worry of the unemployed, he snapped it open at the want-ads and ran his eye down the Help Wanted–Robot column. There was nothing for him under the Specialist heading, even the Unskilled Labor listings were bare and unpromising. New York was a bad town for robots this year.

The want-ads were just as depressing as usual but he could always get a lift from the comic section. He even had a favorite strip, a fact that he scarcely dared mention to himself. “Rattly Robot,” a dull-witted mechanical clod who was continually falling over himself and getting into trouble. It was a repellent caricature, but could still be very funny. Jon was just starting to read it when the ceiling light went out.

It was ten P.M., curfew hour for robots. Lights out and lock yourself in until six in the morning, eight hours of boredom and darkness for all except the few night workers. But there were ways of getting around the letter of a law that didn’t concern itself with a definition of visible light. Sliding aside some of the shielding around his atomic generator, Jon turned up the gain. As it began to run a little hot the heat waves streamed out–visible to him as infra-red rays. He finished reading the paper in the warm, clear light of his abdomen.

The thermocouple in the tip of his second finger left hand, he tested the temperature of his leg. It was soon cool enough to work on. The waterproof gasket stripped off easily, exposing the power leads, nerve wires and the weakened knee joint. The wires disconnected, Jon unscrewed the knee above the joint and carefully placed it on the shelf in front of him. With loving care he took the replacement part from his hip pouch. It was the product of toil, purchased with his savings from three months employment on the Jersey pig farm.

Jon was standing on one leg testing the new knee joint when the ceiling fluorescent flickered and came back on. Five-thirty already, he had just finished in time. A shot of oil on the new bearing completed the job; he stowed away the tools in the pouch and unlocked the door.

The unused elevator shaft acted as waste chute, he slipped his newspaper through a slot in the door as he went by. Keeping close to the wall, he picked his way carefully down the grease-stained stairs. He slowed his pace at the 17th floor as two other mechs turned in ahead of him. They were obviously butchers or meat-cutters; where the right hand should have been on each of them there stuck out a wicked, foot-long knife. As they approached the foot of the stairs they stopped to slip the knives into the plastic sheaths that were bolted to their chestplates. Jon followed them down the ramp into the lobby.

The room was filled to capacity with robots of all sizes, forms and colors. Jon Venex’s greater height enabled him to see over their heads to the glass doors that opened onto the street. It had rained the night before and the rising sun drove red glints from the puddles on the sidewalk. Three robots, painted snow white to show they were night workers, pushed the doors open and came in. No one went out as the curfew hadn’t ended yet. They milled around slowly talking in low voices.

The only human being in the entire lobby was the night clerk dozing behind the counter. The clock over his head said five minutes to six. Shifting his glance from the clock, Jon became aware of a squat black robot waving to attract his attention. The powerful arms and compact build identified him as a member of the Diger family, one of the most numerous groups. He pushed through the crowd and clapped Jon on the back with a resounding clang.

“Jon Venex! I knew it was you as soon as I saw you sticking up out of this crowd like a green tree trunk. I haven’t seen you since the old days on Venus!”