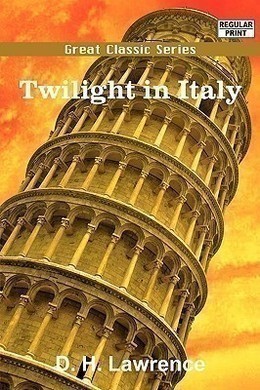 In 1912, D. H. Lawrence left England for the first time visiting Germany, the Alps, and Italy. Although Twilight in Italy, about his experiences on his voyage, was his first travel book, Anais Nin said it ‘cannot be read as an ordinary travel book, for his voyage is philosophic, as well as a symbolic and sensuous one’. The essays about Germany have the tone of a journalistic search for information about an alien culture, while the Alps essays explore the author’s intense personal reactions to the mesmerizing landscape of the mountains. The Italian essays create an image of the polarity between North and South, a duality which extends metaphorically throughout Lawrence’s work. A powerful underlying theme uniting these essays is the threat of approaching war.

The imperial road to Italy goes from Munich across the Tyrol, through Innsbruck and Bozen to Verona, over the mountains. Here the great processions passed as the emperors went South, or came home again from rosy Italy to their own Germany.

And how much has that old imperial vanity clung to the German soul? Did not the German kings inherit the empire of bygone Rome? It was not a very real empire, perhaps, but the sound was high and splendid.

Maybe a certain Grössenwahn is inherent in the German nature. If only nations would realize that they have certain natural characteristics, if only they could understand and agree to each other’s particular nature, how much simpler it would all be.

The imperial procession no longer crosses the mountains, going South. That is almost forgotten, the road has almost passed out of mind. But still it is there, and its signs are standing.

The crucifixes are there, not mere attributes of the road, yet still having something to do with it. The imperial processions, blessed by the Pope and accompanied by the great bishops, must have planted the holy idol like a new plant among the mountains, there where it multiplied and grew according to the soil, and the race that received it.

As one goes among the Bavarian uplands and foothills, soon one realizes here is another land, a strange religion. It is a strange country, remote, out of contact. Perhaps it belongs to the forgotten, imperial processions.

Coming along the clear, open roads that lead to the mountains, one scarcely notices the crucifixes and the shrines. Perhaps one’s interest is dead. The crucifix itself is nothing, a factory-made piece of sentimentalism. The soul ignores it.

But gradually, one after another looming shadowily under their hoods, the crucifixes seem to create a new atmosphere over the whole of the countryside, a darkness, a weight in the air that is so unnaturally bright and rare with the reflection from the snows above, a darkness hovering just over the earth. So rare and unearthly the light is, from the mountains, full of strange radiance. Then every now and again recurs the crucifix, at the turning of an open, grassy road, holding a shadow and a mystery under its pointed hood.

I was startled into consciousness one evening, going alone over a marshy place at the foot of the mountains, when the sky was pale and unearthly, invisible, and the hills were nearly black. At a meeting of the tracks was a crucifix, and between the feet of the Christ a handful of withered poppies. It was the poppies I saw, then the Christ.

It was an old shrine, the wood-sculpture of a Bavarian peasant. The Christ was a peasant of the foot of the Alps. He had broad cheekbones and sturdy limbs. His plain, rudimentary face stared fixedly at the hills, his neck was stiffened, as if in resistance to the fact of the nails and the cross, which he could not escape. It was a man nailed down in spirit, but set stubbornly against the bondage and the disgrace. He was a man of middle age, plain, crude, with some of the meanness of the peasant, but also with a kind of dogged nobility that does not yield its soul to the circumstance. Plain, almost blank in his soul, the middle-aged peasant of the crucifix resisted unmoving the misery of his position. He did not yield. His soul was set, his will was fixed. He was himself, let his circumstances be what they would, his life fixed down.

Across the marsh was a tiny square of orange-coloured light, from the farm-house with the low, spreading roof. I remembered how the man and his wife and the children worked on till dark, silent and intent, carrying the hay in their arms out of the streaming thunder-rain into the shed, working silent in the soaking rain.

The body bent forward towards the earth, closing round on itself; the arms clasped full of hay, clasped round the hay that presses soft and close to the breast and the body, that pricks heat into the arms and the skin of the breast, and fills the lungs with the sleepy scent of dried herbs: the rain that falls heavily and wets the shoulders, so that the shirt clings to the hot, firm skin and the rain comes with heavy, pleasant coldness on the active flesh, running in a trickle down towards the loins, secretly; this is the peasant, this hot welter of physical sensation. And it is all intoxicating. It is intoxicating almost like a soporific, like a sensuous drug, to gather the burden to one’s body in the rain, to stumble across the living grass to the shed, to relieve one’s arms of the weight, to throw down the hay on to the heap, to feel light and free in the dry shed, then to return again into the chill, hard rain, to stoop again under the rain, and rise to return again with the burden.