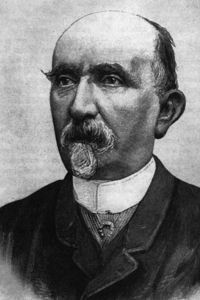 Carlo Lorenzini, better known by the pen name Carlo Collodi, was a Florentine children’s writer known for the world-renowned fairy tale The Adventures of Pinocchio. Lorenzini had won fame as early as 1856 with his novel In vapore and had also begun intense activity on other political newspapers such as Il Fanfulla but in 1875 he entered the domain of children’s literature with Racconti delle fate, a translation of French fairy tales by Perrault. He became fascinated by the idea of using an amiable, rascally character as a means of expressing his own convictions through allegory. In 1880 he began writing Storia di un burattino (“The story of a marionette”), also called Le avventure di Pinocchio, which was published weekly in Il Giornale dei Bambini (the first Italian newspaper for children).

Lorenzini died unaware of the fame and popularity that awaited his work; as in the allegory of the story, Pinocchio eventually went on to lead his own independent life, distinct from that of the author. (source: Wikipedia)

The old wood-carver Geppetto decides to make a wonderful puppet which can dance &amp; turn somersaults, but by chance he chooses an unusual piece of woo...read more »