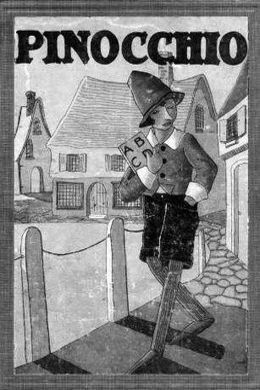 The Tale of a Puppet

The old wood-carver Geppetto decides to make a wonderful puppet which can dance & turn somersaults, but by chance he chooses an unusual piece of wood. The finished puppet can talk & misbehave like the liveliest child. But Pinocchio is brave & inquisitive as well as naughty. After some hair-raising adventures, he earns his heart’s desire.

Though one of the best-known books in the world, Pinocchio at the same time remains unknown—linked in many minds to the Walt Disney movie that bears little relation to Carlo Collodi’s splendid original. That story is of course, about a puppet who, after many trails, succeeds in becoming a “real boy.” Yet it is hardly a sentimental or morally improving tale. To the contrary, Pinocchio is one of the great subversives of the written page, a madcap genius hurtled along at the pleasure and mercy of his desires, a renegade who in many ways resembles his near contemporary Huck Finn.

There was once upon a time a piece of wood in the shop of an old carpenter named Master Antonio. Everybody, however, called him Master Cherry, on account of the end of his nose, which was always as red and polished as a ripe cherry.

No sooner had Master Cherry set eyes on the piece of wood than his face beamed with delight, and, rubbing his hands together with satisfaction, he said softly to himself:

“This wood has come at the right moment; it will just do to make the leg of a little table.”

He immediately took a sharp axe with which to remove the bark and the rough surface, but just as he was going to give the first stroke he heard a very small voice say imploringly, “Do not strike me so hard!”

“I see how it is,” he said, laughing and scratching his wig, “evidently that little voice was all my imagination. Let us set to work again.”

And, taking up the axe, he struck a tremendous blow on the piece of wood.

“Oh! oh! you have hurt me!” cried the same little voice dolefully.

This time Master Cherry was petrified. His eyes started out of his head with fright, his mouth remained open, and his tongue hung out almost to the end of his chin, like a mask on a fountain. As soon as he had recovered the use of his speech he began to say, stuttering and trembling with fear:

“But where on earth can that little voice have come from that said ‘Oh! oh!’? Is it possible that this piece of wood can have learned to cry and to lament like a child? I cannot believe it. This piece of wood is nothing but a log for fuel like all the others, and thrown on the fire it would about suffice to boil a saucepan of beans. How then? Can anyone be hidden inside it? If anyone is hidden inside, so much the worse for him. I will settle him at once.”

So saying, he seized the poor piece of wood and commenced beating it without mercy against the walls of the room.

“I see how it is,” he then said, forcing himself to laugh, and pushing up his wig; “evidently the little voice that said ‘Oh! oh!’ was all my imagination! Let us set to work again.”

Putting the axe aside, he took his plane, to plane and polish the bit of wood; but whilst he was running it up and down he heard the same little voice say, laughing:

“Stop! you are tickling me all over!”

This time poor Master Cherry fell down as if he had been struck by lightning. When he at last opened his eyes he found himself seated on the floor.

His face was changed, even the end of his nose, instead of being crimson, as it was nearly always, had become blue from fright.

At that moment some one knocked at the door.

“Come in,” said the carpenter, without having the strength to rise to his feet.

A lively little old man immediately walked into the shop. His name was Geppetto, but when the boys of the neighborhood wished to make him angry they called him Pudding, because his yellow wig greatly resembled a pudding made of Indian corn.

Geppetto was very fiery. Woe to him who called him Pudding! He became furious and there was no holding him.

“Good-day, Master Antonio,” said Geppetto; “what are you doing there on the floor?”

“I am teaching the alphabet to the ants.”

“Much good may that do you.”

“What has brought you to me, neighbor Geppetto?”

“My legs. But to tell the truth. Master Antonio, I came to ask a favor of you.”

“Here I am, ready to serve you,” replied the carpenter, getting on his knees.

“This morning an idea came into my head.”

“I thought I would make a beautiful wooden puppet; one that could dance, fence, and leap like an acrobat. With this puppet I would travel about the world to earn a piece of bread and a glass of wine. What do you think of it?”

“Bravo, Pudding!” exclaimed the same little voice, and it was impossible to say where it came from.

Hearing himself called Pudding, Geppetto became as red as a turkey-cock from rage and, turning to the carpenter, he said in a fury:

“You called me Pudding!”

“Do you think I called myself Pudding? It was you, I say!”

And, becoming more and more angry, from words they came to blows, and, flying at each other, they bit and fought, and scratched.