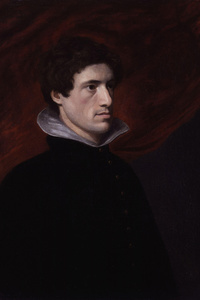 Charles Lamb was an English/Welsh essayist, best known for his Essays of Elia and for the children’s book Tales from Shakespeare, which he produced with his sister, Mary Lamb. Lamb’s first publication was the inclusion of four sonnets in the Coleridge’s Poems on Various Subjects published in 1796 by Joseph Cottle.The sonnets were significantly influenced by the poems of Burns and the sonnets of William Bowles, a largely forgotten poet of the late 18th century.

From a fairly young age Lamb desired to be a poet but never gained the success that he had hoped and lived under the poetic shadow of his friend Coleridge. However, in the first years of the 19th century Lamb began a fruitful literary cooperation with his sister Mary and together they wrote at least three books for William Godwin’s Juvenile Library. The most successful of these was of course Tales From Shakespeare.

Although he did not write his first Elia essay until 1820, Lamb’s gradual perfection of the essay form for which he eventually became famous began as early 1802 in a series of open letters to Leigh Hunt’s Reflector. The most famous of these is called “The Londoner” in which Lamb famously derides the contemporary fascination with nature and the countryside. (source: Wikipedia)

A rapturous appreciation of pork crackling, a touching description of hungry London chimney sweeps, a discussion of the strange pleasure of eating pinea...read more »

Charles Lamb, an English essayist was best known for his essays of Elia and children’s book Tales from Shakespeare, shares with us the legendary Greek h...read more »

Enthralling prose retellings for young readers of some of Shakespeare’s most beloved works. This selection of works features The Tempest, A Midsummer Ni...read more »