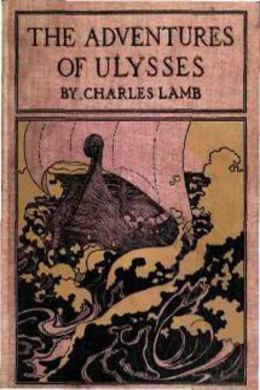 Charles Lamb, an English essayist was best known for his essays of Elia and children’s book Tales from Shakespeare, shares with us the legendary Greek hero, Ulysses and his men, who encounter the dreaded Cyclops, a tribe of giant cannibals, and the treacherous Sirens.

This history tells of the wanderings of Ulysses and his followers in their return from Troy, after the destruction of that famous city of Asia by the Grecians. He was inflamed with a desire of seeing again, after a ten years’ absence, his wife and native country, Ithaca. He was king of a barren spot, and a poor country in comparison of the fruitful plains of Asia, which he was leaving, or the wealthy kingdoms which he touched upon in his return; yet, wherever he came, he could never see a soil which appeared in his eyes half so sweet or desirable as his country earth. This made him refuse the offers of the goddess Calypso to stay with her, and partake of her immortality in the delightful island; and this gave him strength to break from the enchantments of Circe, the daughter of the Sun.

From Troy, ill winds cast Ulysses and his fleet upon the coast of the Cicons, a people hostile to the Grecians. Landing his forces, he laid siege to their chief city, Ismarus, which he took, and with it much spoil, and slew many people. But success proved fatal to him; for his soldiers, elated with the spoil, and the good store of provisions which they found in that place, fell to eating and drinking, forgetful of their safety, till the Cicons, who inhabited the coast, had time to assemble their friends and allies from the interior; who, mustering in prodigious force, set upon the Grecians, while they negligently revelled and feasted, and slew many of them, and recovered the spoil. They, dispirited and thinned in their numbers, with difficulty made their retreat good to the ships.

Thence they set sail, sad at heart, yet something cheered that with such fearful odds against them they had not all been utterly destroyed. A dreadful tempest ensued, which for two nights and two days tossed them about, but the third day the weather cleared, and they had hopes of a favourable gale to carry them to Ithaca; but, as they doubled the Cape of Malea, suddenly a north wind arising drove them back as far as Cythera. After that, for the space of nine days, contrary winds continued to drive them in an opposite direction to the point to which they were bound, and the tenth day they put in at a shore where a race of men dwell that are sustained by the fruit of the lotos-tree. Here Ulysses sent some of his men to land for fresh water, who were met by certain of the inhabitants, that gave them some of their country food to eat–not with any ill intention towards them, though in the event it proved pernicious; for, having eaten of this fruit, so pleasant it proved to their appetite that they in a minute quite forgot all thoughts of home, or of their countrymen, or of ever returning back to the ships to give an account of what sort of inhabitants dwelt there, but they would needs stay and live there among them, and eat of that precious food forever; and when Ulysses sent other of his men to look for them, and to bring them back by force, they strove, and wept, and would not leave their food for heaven itself, so much the pleasure of that enchanting fruit had bewitched them. But Ulysses caused them to be bound hand and foot, and cast under the hatches; and set sail with all possible speed from that baneful coast, lest others after them might taste the lotos, which had such strange qualities to make men forget their native country and the thoughts of home.

Coasting on all that night by unknown and out-of-the-way shores, they came by daybreak to the land where the Cyclops dwell, a sort of giant shepherds that neither sow nor plough, but the earth untilled produces for them rich wheat and barley and grapes, yet they have neither bread nor wine, nor know the arts of cultivation, nor care to know them; for they live each man to himself, without law or government, or anything like a state or kingdom; but their dwellings are in caves, on the steep heads of mountains; every man’s household governed by his own caprice, or not governed at all; their wives and children as lawless as themselves, none caring for others, but each doing as he or she thinks good. Ships or boats they have none, nor artificers to make them, no trade or commerce, or wish to visit other shores; yet they have convenient places for harbours and for shipping. Here Ulysses with a chosen party of twelve followers landed, to explore what sort of men dwelt there, whether hospitable and friendly to strangers, or altogether wild and savage, for as yet no dwellers appeared in sight.