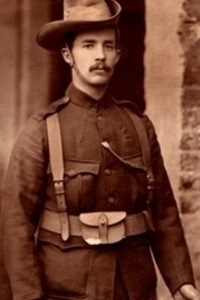 Robert Erskine Childers DSC was the author of the influential novel The Riddle of the Sands and an Irish nationalist who smuggled guns to Ireland in his sailing yacht Asgard. He was executed by the authorities of the nascent Irish Free State during the Irish Civil War. He was the son of British Orientalist scholar Robert Caesar Childers; the cousin of Hugh Childers and Robert Barton; and the father of the fourth President of Ireland, Erskine Hamilton Childers. Childers’s first published work seems to have been some light detective stories he contributed to the Cambridge Review while he was editor. His first book was In the Ranks of the C. I. V., an account of his experiences in the Boer War, but he wrote it without any thought of publication: while serving with the Honourable Artillery Company in southern Africa he composed many long, descriptive letters about his experiences to his two sisters, Dulcibella and Constance. They, together with Elizabeth Thompson, daughter of George Smith of the publishing house Smith, Elder and a friend of the family, edited the letters into book form. The print proofs were waiting for Childers to approve on his return from the war in October 1900 and Smith, Elder published the work in November. It was well-timed to catch the public’s interest in the war, which continued until May 1902, and it sold in substantial numbers.

Erskine Childers, the famed author of the classic novel of sailing and spying The Riddle of the Sands served with London’s finest-The City Imperial Volu...read more »

Brimming with heart-stopping action, The Riddle of the Sands is one the earliest spy novels. This spell-binding story is set in the period before the st...read more »