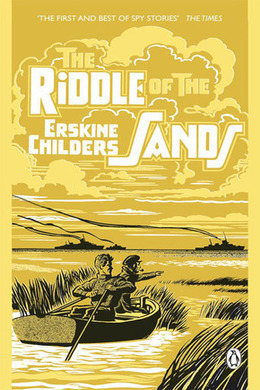 The Riddle of the Sands

Brimming with heart-stopping action, The Riddle of the Sands is one the earliest spy novels. This spell-binding story is set in the period before the start of the First World War. A gem of the thriller genre! While on a sailing trip in the Baltic Sea, two young adventurers-turned-spies uncover a secret German plot to invade England. Written by Childers—who served in the Royal Navy during World War I—as a wake-up call to the British government to attend to its North Sea defenses, The Riddle of the Sands accomplished that task and has been considered a classic of espionage literature ever since, praised as much for its nautical action as for its suspenseful spycraft.

I Have read of men who, when forced by their calling to live for long periods in utter solitude–save for a few black faces–have made it a rule to dress regularly for dinner in order to maintain their self-respect and prevent a relapse into barbarism. It was in some such spirit, with an added touch of self-consciousness, that, at seven o’clock in the evening of 23rd September in a recent year, I was making my evening toilet in my chambers in Pall Mall. I thought the date and the place justified the parallel; to my advantage even; for the obscure Burmese administrator might well be a man of blunted sensibilities and coarse fibre, and at least he is alone with nature, while I–well, a young man of condition and fashion, who knows the right people, belongs to the right clubs, has a safe, possibly a brilliant, future in the Foreign Office–may be excused for a sense of complacent martyrdom, when, with his keen appreciation of the social calendar, he is doomed to the outer solitude of London in September. I say ‘martyrdom’, but in fact the case was infinitely worse. For to feel oneself a martyr, as everybody knows, is a pleasurable thing, and the true tragedy of my position was that I had passed that stage. I had enjoyed what sweets it had to offer in ever dwindling degree since the middle of August, when ties were still fresh and sympathy abundant. I had been conscious that I was missed at Morven Lodge party. Lady Ashleigh herself had said so in the kindest possible manner, when she wrote to acknowledge the letter in which I explained, with an effectively austere reserve of language, that circumstances compelled me to remain at my office. ‘We know how busy you must be just now’, she wrote, ‘and I do hope you won’t overwork; we shall all miss you very much.’ Friend after friend ‘got away’ to sport and fresh air, with promises to write and chaffing condolences, and as each deserted the sinking ship, I took a grim delight in my misery, positively almost enjoying the first week or two after my world had been finally dissipated to the four bracing winds of heaven.

I began to take a spurious interest in the remaining five millions, and wrote several clever letters in a vein of cheap satire, indirectly suggesting the pathos of my position, but indicating that I was broad-minded enough to find intellectual entertainment in the scenes, persons, and habits of London in the dead season. I even did rational things at the instigation of others. For, though I should have liked total isolation best, I, of course, found that there was a sediment of unfortunates like myself, who, unlike me, viewed the situation in a most prosaic light. There were river excursions, and so on, after office-hours; but I dislike the river at any time for its noisy vulgarity, and most of all at this season. So I dropped out of the fresh air brigade and declined H–’s offer to share a riverside cottage and run up to town in the mornings. I did spend one or two week-ends with the Catesbys in Kent; but I was not inconsolable when they let their house and went abroad, for I found that such partial compensations did not suit me. Neither did the taste for satirical observation last. A passing thirst, which I dare say many have shared, for adventures of the fascinating kind described in the New Arabian Nights led me on a few evenings into some shady haunts in Soho and farther eastward; but was finally quenched one sultry Saturday night after an hour’s immersion in the reeking atmosphere of a low music-hall in Ratcliffe Highway, where I sat next a portly female who suffered from the heat, and at frequent intervals refreshed herself and an infant from a bottle of tepid stout.