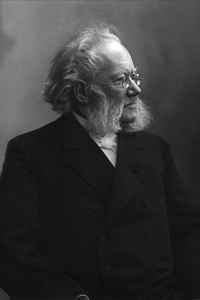 Henrik Johan Ibsen was a major 19th-century Norwegian playwright, theatre director, and poet. He is often referred to as “the father of realism” and is one of the founders of Modernism in theatre. He is the most frequently performed dramatist in the world after Shakespeare, and A Doll’s House became the world’s most performed play by the early 20th century. Several of his plays were considered scandalous to many of his era, when European theatre was required to model strict morals of family life and propriety. Ibsen’s work examined the realities that lay behind many façades, revealing much that was disquieting to many contemporaries. It utilized a critical eye and free inquiry into the conditions of life and issues of morality. The poetic and cinematic play Peer Gynt, however, has strong surreal elements. Ibsen is often ranked as one of the truly great playwrights in the European tradition and has influenced other playwrights and novelists such as George Bernard Shaw, Oscar Wilde, Arthur Miller, James Joyce, Eugene O’Neill and Miroslav Krleža.

Ibsen’s classic play about the struggle between independence and security still resonates with readers and audience members today. Often hailed as an ea...read more »

Dr. Stockmann attempts to expose a water pollution scandal in his home town which is about to establish itself as a spa. When his brother, the mayor, co...read more »

In this drama Ibsen has touched issues that were severely sensitive. The characters drawn in detail are deeply embedded in the plot. The themes of infid...read more »

Despite premiering the next year to negative reviews, the play since been hailed as a classic work of realism, with the character Hedda being considered...read more »

When the lighthouse keeper’s daughter Ellida meets the widower Dr Wangel, she tries to put her long-lost first love far behind her and begin a new life ...read more »

One of the Norwegian playwright’s most mysterious, symbolic, and lyrical dramas explores the life of architect Halvard Solness, once ruthlessly ambitiou...read more »

Ibsen’s last work concludes the series of autobiographical dramas begun with The Master Builder which deal with the aging rebel, despairing of life and ...read more »