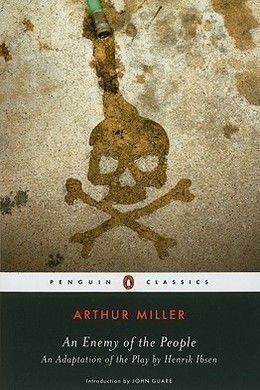 An Enemy of the People

Dr. Stockmann attempts to expose a water pollution scandal in his home town which is about to establish itself as a spa. When his brother, the mayor, conspires with local politicians and the newspaper to suppress the story, Stockmann appeals to the public meeting - only to be shouted down and reviled as ‘an enemy of the people’. Ibsen’s explosive play reveals his distrust of politicians and the blindly held prejudices of the ‘solid majority’

(SCENE.–DR. STOCKMANN’S sitting-room. It is evening. The room is plainly but neatly appointed and furnished. In the right-hand wall are two doors; the farther leads out to the hall, the nearer to the doctor’s study. In the left-hand wall, opposite the door leading to the hall, is a door leading to the other rooms occupied by the family. In the middle of the same wall stands the stove, and, further forward, a couch with a looking-glass hanging over it and an oval table in front of it. On the table, a lighted lamp, with a lampshade. At the back of the room, an open door leads to the dining-room. BILLING is seen sitting at the dining table, on which a lamp is burning. He has a napkin tucked under his chin, and MRS. STOCKMANN is standing by the table handing him a large plate-full of roast beef. The other places at the table are empty, and the table somewhat in disorder, evidently a meal having recently been finished.)

Mrs. Stockmann. You see, if you come an hour late, Mr. Billing, you have to put up with cold meat.

Billing (as he eats). It is uncommonly good, thank you–remarkably good.

Mrs. Stockmann. My husband makes such a point of having his meals punctually, you know.

Billing. That doesn’t affect me a bit. Indeed, I almost think I enjoy a meal all the better when I can sit down and eat all by myself, and undisturbed.

Mrs. Stockmann. Oh well, as long as you are enjoying it–. (Turns to the hall door, listening.) I expect that is Mr. Hovstad coming too.

(PETER STOCKMANN comes in. He wears an overcoat and his official hat, and carries a stick.)

Mrs. Stockmann (coming forward into the sitting-room). Ah, good evening–is it you? How good of you to come up and see us!

Peter Stockmann. I happened to be passing, and so–(looks into the dining-room). But you have company with you, I see.

Mrs. Stockmann (a little embarrassed). Oh, no–it was quite by chance he came in. (Hurriedly.) Won’t you come in and have something, too?

Peter Stockmann. I! No, thank you. Good gracious–hot meat at night! Not with my digestion.

Mrs. Stockmann. Oh, but just once in a way–

Peter Stockmann. No, no, my dear lady; I stick to my tea and bread and butter. It is much more wholesome in the long run–and a little more economical, too.

Mrs. Stockmann (smiling). Now you mustn’t think that Thomas and I are spendthrifts.

Peter Stockmann. Not you, my dear; I would never think that of you. (Points to the Doctor’s study.) Is he not at home?

Mrs. Stockmann. No, he went out for a little turn after supper–he and the boys.

Peter Stockmann. I doubt if that is a wise thing to do. (Listens.) I fancy I hear him coming now.

Hovstad. Yes, I hope you will forgive me, but I was delayed at the printers. Good evening, Mr. Mayor.

Peter Stockmann (bowing a little distantly). Good evening. You have come on business, no doubt.

Hovstad. Partly. It’s about an article for the paper.

Peter Stockmann. So I imagined. I hear my brother has become a prolific contributor to the “People’s Messenger.”

Hovstad. Yes, he is good enough to write in the “People’s Messenger” when he has any home truths to tell.

Mrs. Stockmann (to HOVSTAD). But won’t you–? (Points to the dining-room.)

Peter Stockmann. Quite so, quite so. I don’t blame him in the least, as a writer, for addressing himself to the quarters where he will find the readiest sympathy. And, besides that, I personally have no reason to bear any ill will to your paper, Mr. Hovstad.

Hovstad. I quite agree with you.

Peter Stockmann. Taking one thing with another, there is an excellent spirit of toleration in the town–an admirable municipal spirit. And it all springs from the fact of our having a great common interest to unite us–an interest that is in an equally high degree the concern of every right-minded citizen.

Peter Stockmann. Exactly—our fine, new, handsome Baths. Mark my words, Mr. Hovstad–the Baths will become the focus of our municipal life! Not a doubt of it!

Mrs. Stockmann. That is just what Thomas says.

Peter Stockmann. Think how extraordinarily the place has developed within the last year or two! Money has been flowing in, and there is some life and some business doing in the town. Houses and landed property are rising in value every day.

Hovstad. And unemployment is diminishing,

Peter Stockmann. Yes, that is another thing. The burden on the poor rates has been lightened, to the great relief of the propertied classes; and that relief will be even greater if only we get a really good summer this year, and lots of visitors–plenty of invalids, who will make the Baths talked about.

Hovstad. And there is a good prospect of that, I hear.