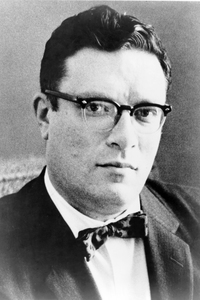 Isaac Asimov was an American author and professor of biochemistry at Boston University, best known for his works of science fiction and for his popular science books. Asimov was one of the most prolific writers of all time, having written or edited more than 500 books. He is widely considered a master of hard science fiction and, along with Robert A. Heinlein and Arthur C. Clarke, was considered one of the “Big Three” science fiction writers during his lifetime. Asimov’s most famous work is the Foundation Series; his other major series are the Galactic Empire series and the Robot series. At this time only one Asimov work is in the public domain; Youth.

The Genetic Effects of Radiation (1966)

Nuclear energy is playing a vital role in the life of every man, woman, and child in the world today. Now and in the years ahead, it will continue to af...read more »

Slim is a boy whose astronomer father is visiting the country estate of an important industrialist. The industrialists son, Red, has found two strange a...read more »