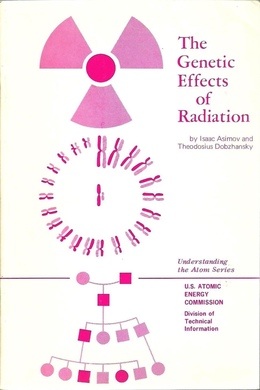 The Genetic Effects of Radiation

Nuclear energy is playing a vital role in the life of every man, woman, and child in the world today. Now and in the years ahead, it will continue to affect all the peoples of the Earth. It is essential that we educate ourselves in the understanding of this vital force if we are to discharge thoughtfully our responsibilities as citizens, and if we are to realize fully the myriad benefits that nuclear energy offers us. This booklet was commissioned by The United States Atomic Energy Commission in 1966 and is still interesting to read today.

There is nothing new under the sun, says the Bible. Nor is the sun itself new, we might add. As long as life has existed on earth, it has been exposed to radiation from the sun, so that life and radiation are old acquaintances and have learned to live together.

We are accustomed to looking upon sunlight as something good, useful, and desirable, and certainly we could not live long without it. The energy of sunlight warms the earth, produces the winds that tend to equalize earth’s temperatures, evaporates the oceans and produces rain and fresh water. Most important of all, it supplies what is needed for green plants to convert carbon dioxide and water into food and oxygen, making it possible for all animal life (including ourselves) to live.

Yet sunlight has its dangers, too. Lizards avoid the direct rays of the noonday sun on the desert, and we ourselves take precautions against sunburn and sunstroke.

The same division into good and bad is to be found in connection with other forms of radiation—forms of which mankind has only recently become aware. Such radiations, produced by radioactivity in the soil and reaching us from outer space, have also been with us from the beginning of time. They are more energetic than sunlight, however, and can do more damage, and because our senses do not detect them, we have not learned to take precautions against them.

To be sure, energetic radiation is present in nature in only very small amounts and is not, therefore, much of a danger. Man, however, has the capacity of imitating nature. Long ago in dim prehistory, for instance, he learned to manufacture a kind of sunlight by setting wood and other fuels on fire. This involved a new kind of good and bad. A whole new technology became possible, on the one hand, and, on the other, the chance of death by burning was also possible. The good in this case far outweighs the evil.

In our own twentieth century, mankind learned to produce energetic radiation in concentrations far surpassing those we usually encounter in nature. Again, a new technology is resulting and again there is the possibility of death.

To see the nature of the danger, let us begin by considering living tissue itself—the living tissue that must withstand the radiation and that can be damaged by it.

The average human adult consists of about 50 trillion cells—50 trillion microscopic, more or less self-contained, blobs of life. He begins life, however, as a single cell, the fertilized ovum.

After the fertilized ovum is formed, it divides and becomes two cells. Each daughter cell divides to produce a total of four cells, and each of those divides and so on.

These “instructions” are contained in the cell’s chromosomes, tiny structures that appear most clearly (like stubby bits of tangled spaghetti) when the cell is in the actual process of division. Each species has some characteristic number of chromosomes in its cells, and these chromosomes can be considered in pairs. Human cells, for instance, contain 23 pairs of chromosomes—46 in all.

When a cell is undergoing division (mitosis), the number of chromosomes is temporarily doubled, as each chromosome brings about the formation of a replica of itself. (This process is called replication.) As the cell divides, the chromosomes are evenly shared by the new cells in such a way that if a particular chromosome goes into one daughter cell, its replica goes into the other. In the end, each cell has a complete set of pairs of chromosomes; and the set in each cell is identical with the set in the original cell before division.