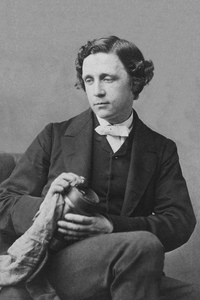 Charles Lutwidge Dodgson, better known by the pen name Lewis Carroll, was an English author, mathematician, logician, Anglican clergyman and photographer. His most famous writings are Alice’s Adventures in Wonderland and its sequel Through the Looking-Glass as well as the poems “The Hunting of the Snark” and “Jabberwocky”, all considered to be within the genre of literary nonsense. His facility at word play, logic, and fantasy has delighted audiences ranging from the most naive to the most sophisticated. His works have remained popular since they were published and have influenced not only children’s literature, but also a number of major 20th century writers such as James Joyce and Jorge Luis Borges.

In 1865 Alice’s Adventures in Wonderland was published under the pen-name of Lewis Carroll. With the immediate, phenomenal success of Alice, the story of the author’s life becomes effectively divided in two: the continuing story of Dodgson’s real life and the evolving myth surrounding “Lewis Carroll.” Carroll quickly became a rich and detailed alter ego, a persona as famous and deeply embedded in the popular psyche as the story he told. It is undisputed that throughout his growing wealth and fame, he continued to teach at Christ Church until 1881, and that he remained in residence there until his death. (source: Wikipedia)

Note: this is a shortened 1916 edition (under half the length). For the original book, which comes with 42 illustrations by John Tenniel, try Alice’s Ad...read more »

Journey with Alice down the rabbit hole into a world of wonder where oddities, logic and wordplay rule supreme. Encounter characters like the grinning C...read more »

Note: This work is a transcript of the 1886 facsimile edition and is without illustrations. You may be more interested in Alice’s Adventures in Wonderla...read more »

Phantasmagoria and Other Poems (1869)

Phantasmagoria is a narrative discussion written in seven cantos between a ghost (a Phantom) and a man named Tibbets. Carroll portrays the ghost as not ...read more »