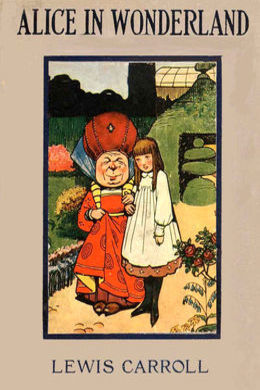 Note: this is a shortened 1916 edition (under half the length). For the original book, which comes with 42 illustrations by John Tenniel, try Alice’s Adventures in Wonderland.

Source of legend and lyric, reference and conjecture, it is for most children pure pleasure in prose. While adults try to decipher Lewis Carroll’s putative use of complex mathematical codes in the text, or debate his alleged use of opium, young readers simply dive with Alice through the rabbit hole, pursuing “The dream-child moving through a land / Of wonders wild and new.” There they encounter the White Rabbit, the Queen of Hearts, the Mock Turtle, and the Mad Hatter, among a multitude of other characters–extinct, fantastical, and commonplace creatures. Alice journeys through this Wonderland, trying to fathom the meaning of her strange experiences. But they turn out to be “curiouser and curiouser,” seemingly without moral or sense. For 150 years, children have revelled in the delightfully non-moralistic, non-educational virtues of this classic. In fact, at every turn, Alice’s new companions scoff at her traditional education. The Mock Turtle, for example, remarks that he took the “regular course” in school: Reeling, Writhing, and branches of Arithmetic-Ambition, Distraction, Uglification, and Derision.

“Curiouser and curiouser!” cried Alice (she was so much surprised that for the moment she quite forgot how to speak good English). “Now I’m opening out like the largest telescope that ever was! Good-by, feet! Oh, my poor little feet, I wonder who will put on your shoes and stockings for you now, dears? I shall be a great deal too far off to trouble myself about you.”

Just at this moment her head struck against the roof of the hall; in fact, she was now rather more than nine feet high, and she at once took up the little golden key and hurried off to the garden door.

Poor Alice! It was as much as she could do, lying down on one side, to look through into the garden with one eye; but to get through was more hopeless than ever. She sat down and began to cry again.

She went on shedding gallons of tears, until there was a large pool all ‘round her and reaching half down the hall.

After a time, she heard a little pattering of feet in the distance and she hastily dried her eyes to see what was coming. It was the White Rabbit returning, splendidly dressed, with a pair of white kid-gloves in one hand and a large fan in the other. He came trotting along in a great hurry, muttering to himself, “Oh! the Duchess, the Duchess! Oh! won’t she be savage if I’ve kept her waiting!”

When the Rabbit came near her, Alice began, in a low, timid voice, “If you please, sir–” The Rabbit started violently, dropped the white kid-gloves and the fan and skurried away into the darkness as hard as he could go.

Alice took up the fan and gloves and she kept fanning herself all the time she went on talking. “Dear, dear! How queer everything is to-day! And yesterday things went on just as usual. Was I the same when I got up this morning? But if I’m not the same, the next question is, ‘Who in the world am I?’ Ah, that’s the great puzzle!”

As she said this, she looked down at her hands and was surprised to see that she had put on one of the Rabbit’s little white kid-gloves while she was talking. “How can I have done that?” she thought. “I must be growing small again.” She got up and went to the table to measure herself by it and found that she was now about two feet high and was going on shrinking rapidly. She soon found out that the cause of this was the fan she was holding and she dropped it hastily, just in time to save herself from shrinking away altogether.

“That was a narrow escape!” said Alice, a good deal frightened at the sudden change, but very glad to find herself still in existence. “And now for the garden!” And she ran with all speed back to the little door; but, alas! the little door was shut again and the little golden key was lying on the glass table as before. “Things are worse than ever,” thought the poor child, “for I never was so small as this before, never!”

As she said these words, her foot slipped, and in another moment, splash! she was up to her chin in salt-water. Her first idea was that she had somehow fallen into the sea. However, she soon made out that she was in the pool of tears which she had wept when she was nine feet high.

Just then she heard something splashing about in the pool a little way off, and she swam nearer to see what it was: she soon made out that it was only a mouse that had slipped in like herself.

“Would it be of any use, now,” thought Alice, “to speak to this mouse? Everything is so out-of-the-way down here that I should think very likely it can talk; at any rate, there’s no harm in trying.” So she began, “O Mouse, do you know the way out of this pool? I am very tired of swimming about here, O Mouse!” The Mouse looked at her rather inquisitively and seemed to her to wink with one of its little eyes, but it said nothing.

“Perhaps it doesn’t understand English,” thought Alice. “I dare say it’s a French mouse, come over with William the Conqueror.” So she began again: “Où est ma chatte?” which was the first sentence in her French lesson-book. The Mouse gave a sudden leap out of the water and seemed to quiver all over with fright. “Oh, I beg your pardon!” cried Alice hastily, afraid that she had hurt the poor animal’s feelings. “I quite forgot you didn’t like cats.”

“Not like cats!” cried the Mouse in a shrill, passionate voice. “Would you like cats, if you were me?”

“Well, perhaps not,” said Alice in a soothing tone; “don’t be angry about it. And yet I wish I could show you our cat Dinah. I think you’d take a fancy to cats, if you could only see her. She is such a dear, quiet thing.” The Mouse was bristling all over and she felt certain it must be really offended. “We won’t talk about her any more, if you’d rather not.”

“We, indeed!” cried the Mouse, who was trembling down to the end of its tail. “As if I would talk on such a subject! Our family always hated cats–nasty, low, vulgar things! Don’t let me hear the name again!”