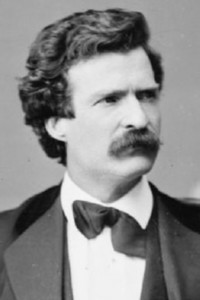 Samuel Langhorne Clemens, better known by the pen name Mark Twain, was an American author and humorist. Twain began his career writing light, humorous verse but evolved into a grim, almost profane chronicler of the vanities, hypocrisies and murderous acts of mankind. At mid-career, with Huckleberry Finn, he combined rich humour, sturdy narrative and social criticism. Twain was a master at rendering colloquial speech and helped to create and popularise a distinctive American literature built on American themes and language.

Twain is most noted for his novels Adventures of Huckleberry Finn, which has since been called the Great American Novel, and The Adventures of Tom Sawyer. He enjoyed immense public popularity and his keen wit and incisive satire earned him praise from both critics and peers.

In this biting satire by Twain, a 19th c. Yankee mechanic is knocked out during a brawl, and wakes to find himself in Camelot, A.D. 528, in King Arthur’...read more »

In 1429, a 17-year-old peasant girl receives a message from Heaven that she is to rescue France from its English oppressors. Within two years this most ...read more »

Regarded by many as the most luminous example of Twain’s work, this historical novel chronicles the French heroine’s life, as purportedly told by her lo...read more »

The Adventures of Huckleberry Finn (1884)

Huckleberry Finn, rebel against school and church, casual inheritor of gold treasure, rafter of the Mississippi, and savior of Jim the runaway slave, is...read more »

Here is the story of Tom, Huck, Becky, and Aunt Polly; a tale of adventures, pranks, playing hookey, and summertime fun. Written by the author sometimes...read more »

Rich with surprise and hilarious adventure, The Prince And The Pauper is a delight satire of England’s romantic past and a joyful boyhood romp filled wi...read more »