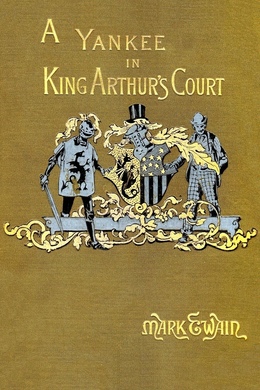 In this biting satire by Twain, a 19th c. Yankee mechanic is knocked out during a brawl, and wakes to find himself in Camelot, A.D. 528, in King Arthur’s Court. When the modern mechanic tries to cure society’s ills (oppressed peasantry, evil church, etc.) with 19th c. industrial inventions like electricity and gunfire - all hell breaks loose!

“Camelot–Camelot,” said I to myself. “I don’t seem to remember hearing of it before. Name of the asylum, likely.”

It was a soft, reposeful summer landscape, as lovely as a dream, and as lonesome as Sunday. The air was full of the smell of flowers, and the buzzing of insects, and the twittering of birds, and there were no people, no wagons, there was no stir of life, nothing going on. The road was mainly a winding path with hoof-prints in it, and now and then a faint trace of wheels on either side in the grass–wheels that apparently had a tire as broad as one’s hand.

Presently a fair slip of a girl, about ten years old, with a cataract of golden hair streaming down over her shoulders, came along. Around her head she wore a hoop of flame-red poppies. It was as sweet an outfit as ever I saw, what there was of it. She walked indolently along, with a mind at rest, its peace reflected in her innocent face. The circus man paid no attention to her; didn’t even seem to see her. And she–she was no more startled at his fantastic make-up than if she was used to his like every day of her life. She was going by as indifferently as she might have gone by a couple of cows; but when she happened to notice me, then there was a change! Up went her hands, and she was turned to stone; her mouth dropped open, her eyes stared wide and timorously, she was the picture of astonished curiosity touched with fear. And there she stood gazing, in a sort of stupefied fascination, till we turned a corner of the wood and were lost to her view. That she should be startled at me instead of at the other man, was too many for me; I couldn’t make head or tail of it. And that she should seem to consider me a spectacle, and totally overlook her own merits in that respect, was another puzzling thing, and a display of magnanimity, too, that was surprising in one so young. There was food for thought here. I moved along as one in a dream.

As we approached the town, signs of life began to appear. At intervals we passed a wretched cabin, with a thatched roof, and about it small fields and garden patches in an indifferent state of cultivation. There were people, too; brawny men, with long, coarse, uncombed hair that hung down over their faces and made them look like animals. They and the women, as a rule, wore a coarse tow-linen robe that came well below the knee, and a rude sort of sandal, and many wore an iron collar. The small boys and girls were always naked; but nobody seemed to know it. All of these people stared at me, talked about me, ran into the huts and fetched out their families to gape at me; but nobody ever noticed that other fellow, except to make him humble salutation and get no response for their pains.

In the town were some substantial windowless houses of stone scattered among a wilderness of thatched cabins; the streets were mere crooked alleys, and unpaved; troops of dogs and nude children played in the sun and made life and noise; hogs roamed and rooted contentedly about, and one of them lay in a reeking wallow in the middle of the main thoroughfare and suckled her family. Presently there was a distant blare of military music; it came nearer, still nearer, and soon a noble cavalcade wound into view, glorious with plumed helmets and flashing mail and flaunting banners and rich doublets and horse-cloths and gilded spearheads; and through the muck and swine, and naked brats, and joyous dogs, and shabby huts, it took its gallant way, and in its wake we followed. Followed through one winding alley and then another,–and climbing, always climbing–till at last we gained the breezy height where the huge castle stood. There was an exchange of bugle blasts; then a parley from the walls, where men-at-arms, in hauberk and morion, marched back and forth with halberd at shoulder under flapping banners with the rude figure of a dragon displayed upon them; and then the great gates were flung open, the drawbridge was lowered, and the head of the cavalcade swept forward under the frowning arches; and we, following, soon found ourselves in a great paved court, with towers and turrets stretching up into the blue air on all the four sides; and all about us the dismount was going on, and much greeting and ceremony, and running to and fro, and a gay display of moving and intermingling colors, and an altogether pleasant stir and noise and confusion.