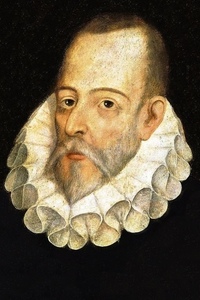 Miguel de Cervantes Saavedra was a Spanish writer who is widely regarded as the greatest writer in the Spanish language, and the greatest novelist of all time. Cervantes’ first major work, a pastoral novel titled La Galatea, was published in 1595. Then in 1605 the first part of his Don Quixote was published in Madrid, and signaled his return to the literary world.

During the last nine years of his life, Cervantes solidified his reputation as a writer, publishing Novelas ejemplares (Exemplary Novels) in 1613, Viaje al Parnaso (Journey to Parnassus) in 1614, and Ocho comedias y ocho entremeses, and the second part of Don Quixote in 1615. His last work, Los trabajos de Persiles y Sigismunda (The Travails of Persiles and Sigismunda), was published posthumously in 1617.

His masterpiece Don Quixote has been translated into more languages than any other book except the Bible, and is considered the first modern novel, a classic of Western literature, and is regarded among the best works of fiction ever written. (source: Wikipedia)

Don Quixote has become so entranced by reading chivalric romances, that he determines to become a knight-errant himself. In the company of his faithful ...read more »

Alonso Quixano is a minor landowner who has read so many stories of chivalry that he descends into fantasy and becomes convinced he is a knight errant. ...read more »