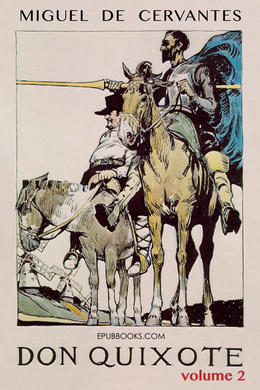 Alonso Quixano is a minor landowner who has read so many stories of chivalry that he descends into fantasy and becomes convinced he is a knight errant. Together with his companion Sancho Panza, the self-styled Don Quixote de la Mancha sets out in search of adventures. His ‘lady’ is Dulcinea del Toboso, an imaginary object of his courtly love crafted from a neighbouring farmgirl by the illusion-struck ‘knight’.

This sequel to was published ten years after the original novel and while part one was mostly farcical, this second half is more serious and philosophical about the theme of deception. It explores the concept of a character understanding that he is written about, an idea much explored in the 20th century.

Cide Hamete Benengeli, in the Second Part of this history, and third sally of Don Quixote, says that the curate and the barber remained nearly a month without seeing him, lest they should recall or bring back to his recollection what had taken place. They did not, however, omit to visit his niece and housekeeper, and charge them to be careful to treat him with attention, and give him comforting things to eat, and such as were good for the heart and the brain, whence, it was plain to see, all his misfortune proceeded. The niece and housekeeper replied that they did so, and meant to do so with all possible care and assiduity, for they could perceive that their master was now and then beginning to show signs of being in his right mind. This gave great satisfaction to the curate and the barber, for they concluded they had taken the right course in carrying him off enchanted on the ox-cart, as has been described in the First Part of this great as well as accurate history, in the last chapter thereof. So they resolved to pay him a visit and test the improvement in his condition, although they thought it almost impossible that there could be any; and they agreed not to touch upon any point connected with knight-errantry so as not to run the risk of reopening wounds which were still so tender.

They came to see him consequently, and found him sitting up in bed in a green baize waistcoat and a red Toledo cap, and so withered and dried up that he looked as if he had been turned into a mummy. They were very cordially received by him; they asked him after his health, and he talked to them about himself very naturally and in very well-chosen language. In the course of their conversation they fell to discussing what they call State-craft and systems of government, correcting this abuse and condemning that, reforming one practice and abolishing another, each of the three setting up for a new legislator, a modern Lycurgus, or a brand-new Solon; and so completely did they remodel the State, that they seemed to have thrust it into a furnace and taken out something quite different from what they had put in; and on all the subjects they dealt with, Don Quixote spoke with such good sense that the pair of examiners were fully convinced that he was quite recovered and in his full senses.

The niece and housekeeper were present at the conversation and could not find words enough to express their thanks to God at seeing their master so clear in his mind; the curate, however, changing his original plan, which was to avoid touching upon matters of chivalry, resolved to test Don Quixote’s recovery thoroughly, and see whether it were genuine or not; and so, from one subject to another, he came at last to talk of the news that had come from the capital, and, among other things, he said it was considered certain that the Turk was coming down with a powerful fleet, and that no one knew what his purpose was, or when the great storm would burst; and that all Christendom was in apprehension of this, which almost every year calls us to arms, and that his Majesty had made provision for the security of the coasts of Naples and Sicily and the island of Malta.

To this Don Quixote replied, “His Majesty has acted like a prudent warrior in providing for the safety of his realms in time, so that the enemy may not find him unprepared; but if my advice were taken I would recommend him to adopt a measure which at present, no doubt, his Majesty is very far from thinking of.”

The moment the curate heard this he said to himself, “God keep thee in his hand, poor Don Quixote, for it seems to me thou art precipitating thyself from the height of thy madness into the profound abyss of thy simplicity.”

But the barber, who had the same suspicion as the curate, asked Don Quixote what would be his advice as to the measures that he said ought to be adopted; for perhaps it might prove to be one that would have to be added to the list of the many impertinent suggestions that people were in the habit of offering to princes.

“Mine, master shaver,” said Don Quixote, “will not be impertinent, but, on the contrary, pertinent.”

“I don’t mean that,” said the barber, “but that experience has shown that all or most of the expedients which are proposed to his Majesty are either impossible, or absurd, or injurious to the King and to the kingdom.”

“Mine, however,” replied Don Quixote, “is neither impossible nor absurd, but the easiest, the most reasonable, the readiest and most expeditious that could suggest itself to any projector’s mind.”

“You take a long time to tell it, Senor Don Quixote,” said the curate.

“I don’t choose to tell it here, now,” said Don Quixote, “and have it reach the ears of the lords of the council to-morrow morning, and some other carry off the thanks and rewards of my trouble.”