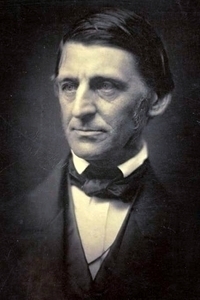 Ralph Waldo Emerson was an American essayist, philosopher, and poet, best remembered for leading the Transcendentalist movement of the mid 19th century. His teachings directly influenced the growing New Thought movement of the mid 1800’s. He was seen as a champion of individualism and a prescient critic of the countervailing pressures of society.

Emerson gradually moved away from the religious and social beliefs of his contemporaries, formulating and expressing the philosophy of Transcendentalism in his 1836 essay, Nature. As a result of this ground breaking work he gave a speech entitled The American Scholar in 1837, which Oliver Wendell Holmes, Sr. considered to be America’s “Intellectual Declaration of Independence”. Considered one of the great orators of the time, Emerson’s enthusiasm and respect for his audience enraptured crowds. His support for abolitionism late in life created controversy, and at times he was subject to abuse from crowds while speaking on the topic. When asked to sum up his work, he said his central doctrine was “the infinitude of the private man.” (source: Wikipedia)

Emerson traveled broadly in England and Scotland in 1833 and again on lecture tour fifteen years later. Drawing on his experiences there as well as his ...read more »

Ralph Waldo Emerson was first known as an orator but converted many of his orations in to essays. This his second books was first published in 1841 and ...read more »

Originally published anonymously, Nature was the first modern essay to recommend the appreciation of the outdoors as an all-encompassing positive force....read more »

Ralph Waldo Emerson’s The Conduct of Life is among the gems of his mature works. First published in the year of Abraham Lincoln’s election as President,...read more »