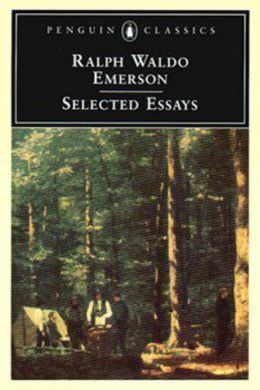 Ralph Waldo Emerson was first known as an orator but converted many of his orations in to essays. This his second books was first published in 1841 and includes the famous essay, “Self-Reliance.” His aunt called it a “strange medley of atheism and false independence,” but it gained favourable reviews in London and Paris. This book, and its popular reception, more than any of Emerson’s contributions to date laid the groundwork for his international fame. (source: Wikipedia)

I greet you on the recommencement of our literary year. Our anniversary is one of hope, and, perhaps, not enough of labor. We do not meet for games of strength or skill, for the recitation of histories, tragedies, and odes, like the ancient Greeks; for parliaments of love and poesy, like the Troubadours; nor for the advancement of science, like our co-temporaries in the British and European capitals. Thus far, our holiday has been simply a friendly sign of the survival of the love of letters amongst a people too busy to give to letters any more. As such it is precious as the sign of an indestructible instinct. Perhaps the time is already come when it ought to be, and will be, something else; when the sluggard intellect of this continent will look from under its iron lids and fill the postponed expectation of the world with something better than the exertions of mechanical skill. Our day of dependence, our long apprenticeship to the learning of other lands, draws to a close. The millions that around us are rushing into life cannot always be fed on the sere remains of foreign harvests. Events, actions arise that must be sung, that will sing themselves. Who can doubt that poetry will revive and lead in a new age, as the star in the constellation Harp, which now flames in our zenith, astronomers announce, shall one day be the pole-star for a thousand years?

In the light of this hope I accept the topic which not only usage but the nature of our association seem to prescribe to this day,–the AMERICAN SCHOLAR. Year by year we come up hither to read one more chapter of his biography. Let us inquire what new lights, new events, and more days have thrown on his character, his duties, and his hopes.

It is one of those fables which out of an unknown antiquity convey an unlooked-for wisdom, that the gods, in the beginning, divided Man into men, that he might be more helpful to himself; just as the hand was divided into fingers, the better to answer its end.

The old fable covers a doctrine ever new and sublime; that there is One Man,–present to all particular men only partially, or through one faculty; and that you must take the whole society to find the whole man. Man is not a farmer, or a professor, or an engineer, but he is all. Man is priest, and scholar, and statesman, and producer, and soldier. In the divided or social state these functions are parceled out to individuals, each of whom aims to do his stint of the joint work, whilst each other performs his. The fable implies that the individual, to possess himself, must sometimes return from his own labor to embrace all the other laborers. But, unfortunately, this original unit, this fountain of power, has been so distributed to multitudes, has been so minutely subdivided and peddled out, that it is spilled into drops, and cannot be gathered. The state of society is one in which the members have suffered amputation from the trunk and strut about so many walking monsters,–a good finger, a neck, a stomach, an elbow, but never a man.

Man is thus metamorphosed into a thing, into many things. The planter, who is Man sent out into the field to gather food, is seldom cheered by any idea of the true dignity of his ministry. He sees his bushel and his cart, and nothing beyond, and sinks into the farmer, instead of Man on the farm. The tradesman scarcely ever gives an ideal worth to his work, but is ridden by the routine of his craft, and the soul is subject to dollars. The priest becomes a form; the attorney a statute-book; the mechanic a machine; the sailor a rope of the ship.

In this distribution of functions the scholar is the delegated intellect. In the right state he is Man Thinking. In the degenerate state, when the victim of society, he tends to become a mere thinker, or, still worse, the parrot of other men’s thinking.

In this view of him, as Man Thinking, the whole theory of his office is contained. Him Nature solicits with all her placid, all her monitory pictures. Him the past instructs. Him the future invites. Is not indeed every man a student, and do not all things exist for the student’s behoof? And, finally, is not the true scholar the only true master? But as the old oracle said, “All things have two handles: Beware of the wrong one.” In life, too often, the scholar errs with mankind and forfeits his privilege. Let us see him in his school, and consider him in reference to the main influences he receives.