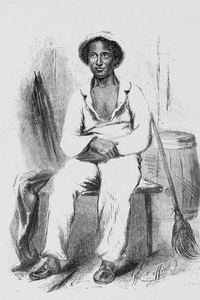 Solomon Northup was a free-born African American from New York, the son of a freed slave and a free woman of color. A farmer and violinist, Northup owned land in Hebron, New York. In 1841 he was kidnapped by slave traders, having been enticed to Washington, D.C. (where slavery was legal) with a job offer as a violinist with traveling entertainers. Shortly after he and his employers arrived in DC, they sold him as a slave, apparently having drugged him into unconsciousness to effect the kidnapping. In his first year of freedom, Northup wrote and published a memoir, Twelve Years a Slave. He lectured on behalf of the abolitionist movement, giving more than two dozen speeches throughout the Northeast about his experiences, to build momentum against slavery.

The story of Solomon Northup is a bizarre and incredible one. Born a free black in New York State in 1808, he was kidnapped in Washington, D.C., in 1841...read more »