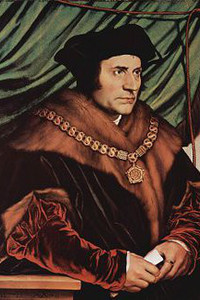 Sir Thomas More was an English lawyer, social philosopher, author, and statesman. He is also recognised as a saint within the Catholic Church. During his life he gained a reputation as a leading Renaissance humanist, an opponent of the Protestant Reformation of Martin Luther and for opposing William Tyndale and his translation of the Bible into the English language. More coined the word “utopia” - a name he gave to the ideal, imaginary island nation whose political system he described in Utopia, published in 1516. An important counsellor to Henry VIII of England, he was tried and executed for treason by beheading in 1535 for denying that the king was the Supreme Head of the Church of England, a title the king had been given by the Act of Supremacy of 1534. More had been in prison in the Tower of London since 1534 for his refusal to take the oath required by the First Succession Act, because the act disparaged the power of the Pope and Henry’s marriage to Catherine of Aragon. More was beatified by the Catholic Church in 1886 and canonised, with John Fisher, in 1935. In 1980, he was added to the Church of England’s calendar of saints. (source: Wikipedia)

One of the most influential books in the Western philosophical and literary tradition, Sir Thomas More’s Utopia appeared in 1516. The formidable Henry V...read more »