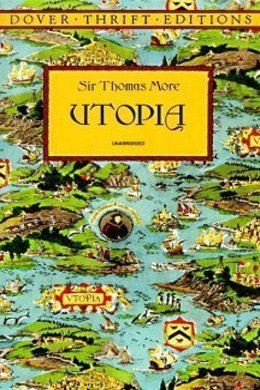 One of the most influential books in the Western philosophical and literary tradition, Sir Thomas More’s Utopia appeared in 1516. The formidable Henry VIII had recently assumed the throne in England, and conflicting ideas about religion were fuelling the Reformation throughout Europe. A scathing satire, Utopia was hugely successful and vaulted More to the forefront of the growing humanist movement. The story of Utopia is told by a mysterious sailor named Raphael Hythloday, who travels to the New World with the Italian explorer Vespucci and remains at a fort built at the farthest point reached. From there, he discovers a strange island kingdom named Utopia, a pagan and communist city-state in which language, social customs, dress, architecture, and education are identical throughout the country’s fifty-four cities. The Utopians have eliminated wealth, the nobility, and currency. Labour and goods are distributed equally and property is held in common. And there are no monasteries, alehouses, or academies to tempt a person to withdraw from society. Given More’s satiric leanings and eventual execution, is Utopia simply an attack on Europe’s wickedness? Or is it a philosophical tract extolling the ideal way to live? Ultimately, Utopia navigates a course between the desire to create perfection and the pragmatic understanding that perfection, given the fallibility of mankind, is impossible.

Henry VIII., the unconquered King of England, a prince adorned with all the virtues that become a great monarch, having some differences of no small consequence with Charles the most serene Prince of Castile, sent me into Flanders, as his ambassador, for treating and composing matters between them. I was colleague and companion to that incomparable man Cuthbert Tonstal, whom the King, with such universal applause, lately made Master of the Rolls; but of whom I will say nothing; not because I fear that the testimony of a friend will be suspected, but rather because his learning and virtues are too great for me to do them justice, and so well known, that they need not my commendations, unless I would, according to the proverb, “Show the sun with a lantern.” Those that were appointed by the Prince to treat with us, met us at Bruges, according to agreement; they were all worthy men. The Margrave of Bruges was their head, and the chief man among them; but he that was esteemed the wisest, and that spoke for the rest, was George Temse, the Provost of Casselsee: both art and nature had concurred to make him eloquent: he was very learned in the law; and, as he had a great capacity, so, by a long practice in affairs, he was very dexterous at unravelling them. After we had several times met, without coming to an agreement, they went to Brussels for some days, to know the Prince’s pleasure; and, since our business would admit it, I went to Antwerp. While I was there, among many that visited me, there was one that was more acceptable to me than any other, Peter Giles, born at Antwerp, who is a man of great honour, and of a good rank in his town, though less than he deserves; for I do not know if there be anywhere to be found a more learned and a better bred young man; for as he is both a very worthy and a very knowing person, so he is so civil to all men, so particularly kind to his friends, and so full of candour and affection, that there is not, perhaps, above one or two anywhere to be found, that is in all respects so perfect a friend: he is extraordinarily modest, there is no artifice in him, and yet no man has more of a prudent simplicity. His conversation was so pleasant and so innocently cheerful, that his company in a great measure lessened any longings to go back to my country, and to my wife and children, which an absence of four months had quickened very much. One day, as I was returning home from mass at St. Mary’s, which is the chief church, and the most frequented of any in Antwerp, I saw him, by accident, talking with a stranger, who seemed past the flower of his age; his face was tanned, he had a long beard, and his cloak was hanging carelessly about him, so that, by his looks and habit, I concluded he was a seaman. As soon as Peter saw me, he came and saluted me, and as I was returning his civility, he took me aside, and pointing to him with whom he had been discoursing, he said, “Do you see that man? I was just thinking to bring him to you.” I answered, “He should have been very welcome on your account.” “And on his own too,” replied he, “if you knew the man, for there is none alive that can give so copious an account of unknown nations and countries as he can do, which I know you very much desire.” “Then,” said I, “I did not guess amiss, for at first sight I took him for a seaman.” “But you are much mistaken,” said he, “for he has not sailed as a seaman, but as a traveller, or rather a philosopher. This Raphael, who from his family carries the name of Hythloday, is not ignorant of the Latin tongue, but is eminently learned in the Greek, having applied himself more particularly to that than to the former, because he had given himself much to philosophy, in which he knew that the Romans have left us nothing that is valuable, except what is to be found in Seneca and Cicero. He is a Portuguese by birth, and was so desirous of seeing the world, that he divided his estate among his brothers, ran the same hazard as Americus Vesputius, and bore a share in three of his four voyages that are now published; only he did not return with him in his last, but obtained leave of him, almost by force, that he might be one of those twenty-four who were left at the farthest place at which they touched in their last voyage to New Castile. The leaving him thus did not a little gratify one that was more fond of travelling than of returning home to be buried in his own country; for he used often to say, that the way to heaven was the same from all places, and he that had no grave had the heavens still over him. Yet this disposition of mind had cost him dear, if God had not been very gracious to him; for after he, with five Castalians, had travelled over many countries, at last, by strange good fortune, he got to Ceylon, and from thence to Calicut, where he, very happily, found some Portuguese ships; and, beyond all men’s expectations, returned to his native country.”