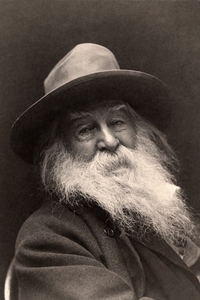 Walter “Walt” Whitman was an American poet, essayist and journalist. A humanist, he was a part of the transition between transcendentalism and realism, incorporating both views in his works. Whitman is among the most influential poets in the American canon, often called the father of free verse. His work was very controversial in its time, particularly his poetry collection Leaves of Grass, which was described as obscene for its overt sexuality. Whitman’s major work, Leaves of Grass, was first published in 1855 with his own money. The work was an attempt at reaching out to the common person with an American epic. He continued expanding and revising it until his death in 1892.

‘I celebrate myself, And what I assume you shall assume, For every atom belonging to me as good belongs to you. I loafe and invite my soul, I lean and l...read more »