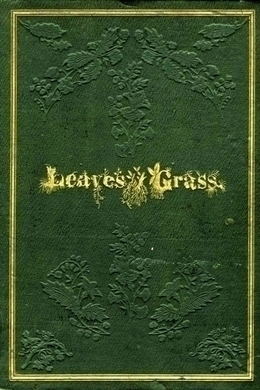 ‘I celebrate myself, And what I assume you shall assume, For every atom belonging to me as good belongs to you. I loafe and invite my soul, I lean and loafe at my ease….observing a spear of summer grass.’ So begins Leaves of Grass, the first great American poem and indeed, to this day, the greatest and most essentially American poem in all our national literature. The publication of Leaves of Grass in July 1855 was a landmark event in literary history. Ralph Waldo Emerson judged the book ‘the most extraordinary piece of wit and wisdom America has yet contributed.’ Nothing like the volume had ever appeared before. Everything about it–the unusual jacket and title page, the exuberant preface, the twelve free-flowing, untitled poems embracing every realm of experience–was new. The 1855 edition broke new ground in its relaxed style, which prefigured free verse; in its sexual candor; in its images of racial bonding and democratic togetherness; and in the intensity of its affirmation of the sanctity of the physical world.

One’s-self I sing, a simple separate person, Yet utter the word Democratic, the word En-Masse.

Of physiology from top to toe I sing, Not physiognomy alone nor brain alone is worthy for the Muse, I say the Form complete is worthier far, The Female equally with the Male I sing.

Of Life immense in passion, pulse, and power, Cheerful, for freest action form’d under the laws divine, The Modern Man I sing.

As I Ponder’d in Silence

As I ponder’d in silence, Returning upon my poems, considering, lingering long, A Phantom arose before me with distrustful aspect, Terrible in beauty, age, and power, The genius of poets of old lands, As to me directing like flame its eyes, With finger pointing to many immortal songs, And menacing voice, What singest thou? it said, Know’st thou not there is but one theme for ever-enduring bards? And that is the theme of War, the fortune of battles, The making of perfect soldiers.

Be it so, then I answer’d, I too haughty Shade also sing war, and a longer and greater one than any, Waged in my book with varying fortune, with flight, advance and retreat, victory deferr’d and wavering, (Yet methinks certain, or as good as certain, at the last,) the field the world, For life and death, for the Body and for the eternal Soul, Lo, I too am come, chanting the chant of battles, I above all promote brave soldiers.

In Cabin’d Ships at Sea

In cabin’d ships at sea, The boundless blue on every side expanding, With whistling winds and music of the waves, the large imperious waves, Or some lone bark buoy’d on the dense marine, Where joyous full of faith, spreading white sails, She cleaves the ether mid the sparkle and the foam of day, or under many a star at night, By sailors young and old haply will I, a reminiscence of the land, be read, In full rapport at last.

Here are our thoughts, voyagers’ thoughts, Here not the land, firm land, alone appears, may then by them be said, The sky o’erarches here, we feel the undulating deck beneath our feet, We feel the long pulsation, ebb and flow of endless motion, The tones of unseen mystery, the vague and vast suggestions of the briny world, the liquid-flowing syllables, The perfume, the faint creaking of the cordage, the melancholy rhythm, The boundless vista and the horizon far and dim are all here, And this is ocean’s poem.

Then falter not O book, fulfil your destiny, You not a reminiscence of the land alone, You too as a lone bark cleaving the ether, purpos’d I know not whither, yet ever full of faith, Consort to every ship that sails, sail you! Bear forth to them folded my love, (dear mariners, for you I fold it here in every leaf;) Speed on my book! spread your white sails my little bark athwart the imperious waves, Chant on, sail on, bear o’er the boundless blue from me to every sea, This song for mariners and all their ships.

I heard that you ask’d for something to prove this puzzle the New World, And to define America, her athletic Democracy, Therefore I send you my poems that you behold in them what you wanted.

You who celebrate bygones, Who have explored the outward, the surfaces of the races, the life that has exhibited itself, Who have treated of man as the creature of politics, aggregates, rulers and priests, I, habitan of the Alleghanies, treating of him as he is in himself in his own rights, Pressing the pulse of the life that has seldom exhibited itself, (the great pride of man in himself,) Chanter of Personality, outlining what is yet to be, I project the history of the future.

To Thee Old Cause

To thee old cause! Thou peerless, passionate, good cause, Thou stern, remorseless, sweet idea, Deathless throughout the ages, races, lands, After a strange sad war, great war for thee, (I think all war through time was really fought, and ever will be really fought, for thee,) These chants for thee, the eternal march of thee.

(A war O soldiers not for itself alone, Far, far more stood silently waiting behind, now to advance in this book.)

Thou orb of many orbs! Thou seething principle! thou well-kept, latent germ! thou centre! Around the idea of thee the war revolving, With all its angry and vehement play of causes, (With vast results to come for thrice a thousand years,) These recitatives for thee,–my book and the war are one, Merged in its spirit I and mine, as the contest hinged on thee, As a wheel on its axis turns, this book unwitting to itself, Around the idea of thee.