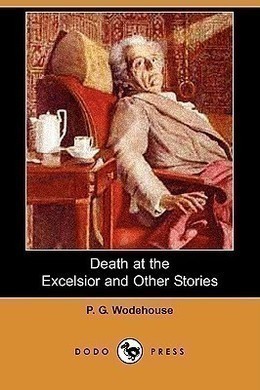 Death at the Excelsior

Death At The Excelsior is a highly recommended introduction into the world of Wodehouse. A sterling collection of early short stories from the master of comedic complications. Death at the Excelsior and Others is a posthumously published compilation of short stories by Wodehouse, including:

The room was the typical bedroom of the typical boarding-house, furnished, insofar as it could be said to be furnished at all, with a severe simplicity. It contained two beds, a pine chest of drawers, a strip of faded carpet, and a wash basin. But there was that on the floor which set this room apart from a thousand rooms of the same kind. Flat on his back, with his hands tightly clenched and one leg twisted oddly under him and with his teeth gleaming through his grey beard in a horrible grin, Captain John Gunner stared up at the ceiling with eyes that saw nothing.

Until a moment before, he had had the little room all to himself. But now two people were standing just inside the door, looking down at him. One was a large policeman, who twisted his helmet nervously in his hands. The other was a tall, gaunt old woman in a rusty black dress, who gazed with pale eyes at the dead man. Her face was quite expressionless.

The woman was Mrs. Pickett, owner of the Excelsior Boarding-House. The policeman’s name was Grogan. He was a genial giant, a terror to the riotous element of the waterfront, but obviously ill at ease in the presence of death. He drew in his breath, wiped his forehead, and whispered: “Look at his eyes, ma’am!”

Mrs. Pickett had not spoken a word since she had brought the policeman into the room, and she did not do so now. Constable Grogan looked at her quickly. He was afraid of Mother Pickett, as was everybody else along the waterfront. Her silence, her pale eyes, and the quiet decisiveness of her personality cowed even the tough old salts who patronized the Excelsior. She was a formidable influence in that little community of sailormen.

“That’s just how I found him,” said Mrs. Pickett. She did not speak loudly, but her voice made the policeman start.

He wiped his forehead again. “It might have been apoplexy,” he hazarded.

Mrs. Pickett said nothing. There was a sound of footsteps outside, and a young man entered, carrying a black bag.

“Good morning, Mrs. Pickett. I was told that–Good Lord!” The young doctor dropped to his knees beside the body and raised one of the arms. After a moment he lowered it gently to the floor, and shook his head in grim resignation.

“He’s been dead for hours,” he announced. “When did you find him?”

“Twenty minutes back,” replied the old woman. “I guess he died last night. He never would be called in the morning. Said he liked to sleep on. Well, he’s got his wish.”

“What did he die of, sir?” asked the policeman.

“It’s impossible to say without an examination,” the doctor answered. “It looks like a stroke, but I’m pretty sure it isn’t. It might be a coronary attack, but I happen to know his blood pressure was normal, and his heart sound. He called in to see me only a week ago, and I examined him thoroughly. But sometimes you can be deceived. The inquest will tell us.” He eyed the body almost resentfully. “I can’t understand it. The man had no right to drop dead like this. He was a tough old sailor who ought to have been good for another twenty years. If you want my honest opinion–though I can’t possibly be certain until after the inquest–I should say he had been poisoned.”

“How would he be poisoned?” asked Mrs. Pickett quietly.

“That’s more than I can tell you. There’s no glass about that he could have drunk it from. He might have got it in capsule form. But why should he have done it? He was always a pretty cheerful sort of old man, wasn’t he?”

“Yes, sir,” said the Constable. “He had the name of being a joker in these parts. Kind of sarcastic, they tell me, though he never tried it on me.”

“He must have died quite early last night,” said the doctor. He turned to Mrs. Pickett. “What’s become of Captain Muller? If he shares this room he ought to be able to tell us something about it.”

“Captain Muller spent the night with some friends at Portsmouth,” said Mrs. Pickett. “He left right after supper, and hasn’t returned.”

The doctor stared thoughtfully about the room, frowning.

“I don’t like it. I can’t understand it. If this had happened in India I should have said the man had died from some form of snakebite. I was out there two years, and I’ve seen a hundred cases of it. The poor devils all looked just like this. But the thing’s ridiculous. How could a man be bitten by a snake in a Southampton waterfront boarding-house? Was the door locked when you found him, Mrs. Pickett?”

Mrs. Pickett nodded. “I opened it with my own key. I had been calling to him and he didn’t answer, so I guessed something was wrong.”

The Constable spoke: “You ain’t touched anything, ma’am? They’re always very particular about that. If the doctor’s right, and there’s been anything up, that’s the first thing they’ll ask.”

“Everything’s just as I found it.”

“What’s that on the floor beside him?” the doctor asked.