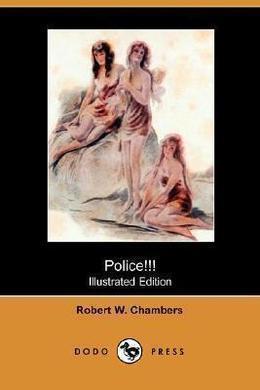 In this thoroughly entertaining story collection, the renowned Dr. Percy travels the world searching for unique animal specimens – and keeps an eye on attractive examples of the fairer sex, as well. Will his dedication to these dual quests ever pay the dividends he’s looking for? Equal parts romantic farce and fantastical science fiction, Police!!! is a rollicking read with something for everyone.

Although the man’s back was turned toward me, I was uncomfortably conscious that he was watching me. How he could possibly be watching me while I stood directly behind him, I did not ask myself; yet, nevertheless, instinct warned me that I was being inspected; that somehow or other the man was staring at me as steadily as though he and I had been face to face and his faded, sea-green eyes were focussed upon me.

It was an odd sensation which persisted in spite of logic, and of which I could not rid myself. Yet the little waitress did not seem to share it. Perhaps she was not under his glassy inspection. But then, of course, I could not be either.

No doubt the nervous tension incident to the expedition was making me supersensitive and even morbid.

Our sail-boat rode the shallow torquoise-tinted waters at anchor, rocking gently just off the snowy coral reef on which we were now camping. The youthful waitress who, for economy’s sake, wore her cap, apron, collar and cuffs over her dainty print dress, was seated by the signal fire writing in her diary. Sometimes she thoughtfully touched her pencil point with the tip of her tongue; sometimes she replenished the fire from a pile of dead mangrove branches heaped up on the coral reef beside her. Whatever she did she accomplished gracefully.

As for the man, Grue, his back remained turned toward us both and he continued, apparently, to scan the horizon for the sail which we all expected. And all the time I could not rid myself of the unpleasant idea that somehow or other he was looking at me, watching attentively the expression of my features and noting my every movement.

The smoke of our fire blew wide across leagues of shallow, sparkling water, or, when the wind veered, whirled back into our faces across the reef, curling and eddying among the standing mangroves like fog drifting.

Seated there near the fire, from time to time I swept the horizon with my marine glasses; but there was no sign of Kemper; no sail broke the far sweep of sky and water; nothing moved out there save when a wild duck took wing amid the dark raft of its companions to circle low above the ocean and settle at random, invisible again except when, at intervals, its white breast flashed in the sunshine.

Meanwhile the waitress had ceased to write in her diary and now sat with the closed book on her knees and her pencil resting against her lips, gazing thoughtfuly at the back of Grue’s head.

It was a ratty head of straight black hair, and looked greasy. The rest of him struck me as equally unkempt and dingy–a youngish man, lean, deeply bitten by the sun of the semi-tropics to a mahogany hue, and unusually hairy.

I don’t mind a brawny, hairy man, but the hair on Grue’s arms and chest was a rusty red, and like a chimpanzee’s in texture, and sometimes a wildly absurd idea possessed me that the man needed it when he went about in the palm forests without his clothes.

But he was only a “poor white”–a “cracker” recruited from one of the reefs near Pelican Light, where he lived alone by fishing and selling his fish to the hotels at Heliatrope City. The sail-boat was his; he figured as our official guide on this expedition–an expedition which already had begun to worry me a great deal.

For it was, perhaps, the wildest goose chase and the most absurdly hopeless enterprise ever undertaken in the interest of science by the Bronx Park authorities.

Nothing is more dreaded by scientists than ridicule; and it was in spite of this terror of ridicule that I summoned sufficient courage to organize an exploring party and start out in search of something so extraordinary, so hitherto unheard of, that I had not dared reveal to Kemper by letter the object of my quest.

No, I did not care to commit myself to writing just yet; I had merely sent Kemper a letter to join me on Sting-ray Key.

He telegraphed me from Tampa that he would join me at the rendezvous; and I started directly from Bronx Park for Heliatrope City; arrived there in three days; found the waitress all ready to start with me; inquired about a guide and discovered the man Grue in his hut off Pelican Light; made my bargain with him; and set sail for Sting-ray Key, the most excited and the most nervous young man who ever had dared disaster in the sacred cause of science.

Everything was now at stake, my honour, reputation, career, fortune. For, as chief of the Anthropological Field Survey Department of the great Bronx Park Zoölogical Society, I was perfectly aware that no scientific reputation can survive ridicule.

Nevertheless, the die had been cast, the Rubicon crossed in a sail-boat containing one beachcombing cracker, one hotel waitress, a pile of camping kit and special utensils, and myself!