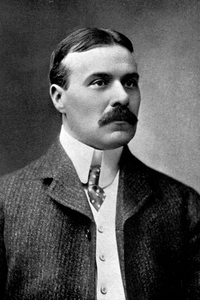 Robert William Chambers was an American artist and fiction writer. His first novel, In the Quarter was published in 1887 but his most famous, and perhaps most meritorious, effort is The King in Yellow, a collection of Art Nouveau short stories. E. F. Bleiler describes it as one of the most important works of American supernatural fiction.It was also strongly admired by H.P. Lovecraft and his circle. Chambers returned to the weird genre in his later short story collections The Maker of Moons, The Mystery of Choice and The Tree of Heaven, but none earned him as much success as The King in Yellow. Some of Chambers’s work contains elements of science fiction, such as In Search of the Unknown and Police!!!, about a zoologist who encounters monsters. Chambers later turned to writing romantic fiction to earn a living and according to some estimates, had one of the most successful literary careers of his period, his later novels selling well and a handful achieving best-seller status.

A collection of short stories by Robert W. Chambers, author of The King in Yellow. A collection of light romantic tales in which Chambers’ love of fishi...read more »

Set during the Revolutionary War in Broadalbin; the hero is the ward of Sir William Johnson. He is sent to stop an Indian war planned by Walter Buttler ...read more »

Our narrator is hired by the New York Zoological Society to assist a professor who is in charge of their gardens and exhibits. He embarks on his search ...read more »

In this thoroughly entertaining story collection, the renowned Dr. Percy travels the world searching for unique animal specimens – and keeps an eye on a...read more »

What if you were involved in the theft of one of the legendary jewels of all time – and you didn’t even know it? That’s exactly what happens to the inno...read more »

Gender roles in the American Revolutionary War period were not exactly a bastion of progressiveness. However, even during a time when most women were en...read more »

With its strange, imaginative blend of horror, science fiction, romance and lyrical prose, Robert W. Chambers’ The King in Yellow is a classic masterpie...read more »

These classic tales, centering on an American in Breton and a local French girl include stories about the murder of a butterfly collector and the haunti...read more »

An American-born girl, Tressa Norne, has been held in bondage in the Temple of Erlik, an Oriental devil-god of Central Asia. After many years of captivi...read more »

Mr. Gatewood is a grumpy man whose friend wishes to find a woman to entertain him. A soldier continues to see visions of a woman he’d seen once on a tra...read more »

The Crown Prince is partly right; the majority in the world is against him and what he stands for; but not against Germany and the Germans.