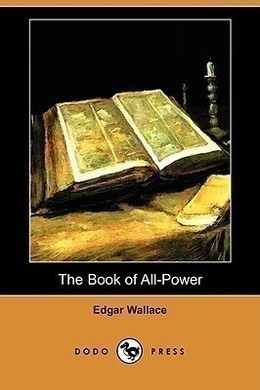 The Book of All-Power

The chairman of the Ukraine Oil Company looked with a little amusement at the young man who sat on the edge of a chair by the chairman’s desk, and noted how the eye of the youth had kindled at every fresh discouragement which the chairman had put forward. Enthusiasm, reflected the elder man, was one of the qualities which were most desirable in the man who was to accept the position which Malcolm Hay was at that moment considering.

“Russia is a strange country,” said Mr. Tremayne. “It is one of the mystery places of the world. You hear fellows coming back from China who tell you amazing stories of the idiosyncrasies of the Chink. But I can tell you, from my own personal observations, that the Chinaman is an open book in words of one syllable compared with the average Russian peasant. By the way, you speak Russian, I understand?”

“Oh, yes, sir,” he said, “I have been talking Russian ever since I was sixteen, and I speak both the dialects.”

“Good!” nodded Mr. Tremayne. “Now, all that remains for you to do is to think both dialects. I was in Southern Russia attending to our wells for twenty years. In fact, long before our wells came into being, and I can honestly say that, though I am not by any means an unintelligent man, I know just as little about the Russian to-day as I did when I went there. He’s the most elusive creature. You think you know him two days after you have met him. Two days later you find that you have changed all your opinions about him; and by the end of the first year, if you have kept a careful note of your observations and impressions in a diary, you will discover that you have three hundred and sixty-five different views–unless it happens to be a leap year.”

“What happens in a leap year?” asked the innocent Hay.

“You have three hundred and sixty-six views,” said the solemn Mr. Tremayne.

He struck a bell.

“We shan’t want you to leave London for a week or two,” he said, “and in the meantime you had better study up our own special literature. We can give you particulars about the country–that part of the country in which the wells are situated–which you will not find in the guidebooks. There are also a few notable personages whom it will be advisable for you to study.”

“I know most of them,” said the youth with easy confidence. “As a matter of fact, I got the British Consul to send me a local directory and swotted it.”

“And what did the local directory say about Israel Kensky?” he asked innocently.

“It is the only name worth remembering,” said the other dryly, “and, by the way, you’ll be able to study him in a strange environment, for he is in London at this moment.”

A clerk had answered the bell and stood waiting in the doorway.

“Get Mr. Hay those books and pamphlets I spoke to you about,” said Tremayne. “And, by the way, when did M. Kensky arrive?”

“In fact,” he said, “London this week will be filled with people whose names are not in your precious directory, and all of whom you should know. The Yaroslavs are paying a sort of state visit.”

“The Grand Duke and his daughter,” added Mr. Tremayne.

“Well,” smiled the young man, “I’m not likely to meet the Grand Duke or the Grand Duchess. I understand the royal family of Russia is a little exclusive.”

“Everything is likely in Russia,” said the optimistic Mr. Tremayne. “If you come back in a few years’ time and tell me that you’ve been appointed an admiral in the Russian Navy, or that you’ve married the Grand Duchess Irene Yaroslav, I shall not for one moment disbelieve you. At the same time, if you come back from Russia without your ears, the same having been cut off by your peasant neighbours to propitiate the ghost of a martyr who died six hundred years ago, I shall not be surprised either. That is the country you’re going to–and I envy you.”

“I’m a little surprised at myself,” admitted Malcolm, “it seems almost incredible. Of course, sir, I have a lot to learn and I’m not placing too much reliance upon my degree.”

“Your science degree?” said Tremayne. “It may be useful, but a divinity degree would have been better.”