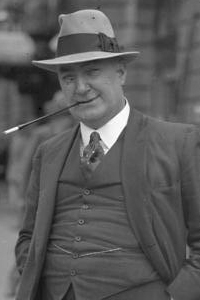 Richard Horatio Edgar Wallace was a prolific English writer, writing 957 short stories and over 170 novels, with more than 160 films based on his works - one of Wallace’s publishers claimed that a quarter of all books then read in England were written by him. He is best remembered for writing the J. G. Reeder detective stories, the Green Archer and creation of King Kong. Selling over 50 million copies of his combined works in various editions, the Economist describes him as “one of the most prolific thriller writers of [the 20th] century”, although few of his books are still in print in the UK.

The situation appears calm in the colonial area of the Sanders. But dark clouds are gathering on the horizon and the Captain Hamilton and the inexperien...read more »

Thrilling tales from the secret files of the world’s most famous vigilantes. An honest workingman tries to intimidate his wife’s blackmailer and winds u...read more »

It is a time when the major world powers are vying for colonial honors, a time of ju-ju, witch doctors, and an uneasy peace with Bosambo, impressive chi...read more »

After a tour of duty overseas, the eccentric character Augustus Tibbetts (known as ‘Bones’ to his associates) returns to London to embark on civilian li...read more »

It is a time when the world’s most powerful nations are vying for colonial honor, a time of trading steamers and tribal chiefs. In the mysterious Africa...read more »

The fourth instalment of the Sanders series. Those who love classic adventure especially set against an African backdrop will discover a rich vein of re...read more »

The Master of Mystery has become the Master of Mirth! In Educated Evans Edgar Wallace has forsaken the Realm of Crime for the Kingdom of Mirth! His st...read more »

When the Foreign Secretary, Sir Philip Ramon, receives a threatening, greenish-grey letter; ‘We shall have no other course to pursue but to fulfil our p...read more »

This continues the life of Evans, Edgar Wallace’s Cockney tipster and ‘the wizard of Camden Town’. Follow the loves, predictions and calamities of this ...read more »

Pining for a gripping tale from the classic early years of detective fiction? Dip into Jack O’ Judgment by Edgar Wallace. Though his intentions might be...read more »

It is a time when the major world powers are vying for colonial honors, a time of juju, witch doctors, and an uneasy peace with Bosambo, the impressive ...read more »

The further escapades of the incorrigible Evans, Edgar Wallace’s Cockney hero of the Turf feature in these twelve tales. There are bets, bookmakers, hor...read more »

J. G. Reeder is a shabby little man with red hair and weak eyes. However, his extraordinary mind is rapier sharp. Red Aces is the fourth and last of Edg...read more »

Employing his unique style of innocent and endearing humour, Bones has written to the newspapers The Surrey Star and The Middlesex Plain Dealer inviting...read more »

Charged with the task of engaging with the indigenous peoples of Nigeria during the colonial period, Sanders takes a no-nonsense approach that, though i...read more »

Sanders and Co. return to Africa (following the events in Bones in London) to bring the old Kings country under the Union Jack and to try and find what ...read more »

Action-adventure fans, you’ve come to the right place. In ten pulse-pounding episodes, intrepid pilot Tam manages to find his way into a series of incre...read more »

Jack Glover of Rennet, glover and Simpson does not believe his cousin Meredith killed Bulford. Meredith s father was an eccentric and unless Meredith is...read more »

Francis Elmer has vanished, and all that is found is a typed note signed ‘The Head Hunter’. Elmer’s niece Adele Leamington is an extra at the Knebworth ...read more »

In their second explosive adventure, the Four Just Men must sacrifice one of their own. There are crimes for which no punishment is adequate, offences t...read more »

Inspector Holt is enjoying the Caf‚ de la Paix and the Boulevard des Italiens. He and his valet Sunny are planning a visit to Monte Carlo when an urgent...read more »

To whisper the name of Charles Pearce is to incite a hoard of wild imaginings, all that makes the flesh creep. Pearce is physically repulsive, tiny in s...read more »

Forged notes have started to appear everywhere. Mr. Cheyne Wells of Harley Street has been given one. So has Porter. Peter Clifton is rich, but no one i...read more »

A brilliant but maniacal scientist is determined to unleash a virulent plague that threatens to drive humankind to the brink of extinction. The evil doc...read more »

For many, Haynes, known as “Gunner”, is not an outlaw but a gentleman of unorthodox methods. For Scotland Yard, he is one of the most skilled thieves in...read more »

There are crimes for which no punishment is adequate, offences that the written law cannot redress. The three friends, Pioccart, Manfred and Gonsalez, m...read more »

Another entry in Edgar Wallace’s eminently popular Sanders of the River series, The Keepers of the King’s Peace is an unlikely but ultimately engaging c...read more »

‘Grace,’ he said, ‘I am going to apply the methods of the Four to this devil Stedland.’ But the judge finds Jeffrey Storr guilty, not Stedland. As Storr...read more »

The body of a young man is found splayed out in the middle of one of the most august public squares in England. Soon it is discovered that the dead man ...read more »

The chief protagonist, a typical Wallace anti-hero vigilante, one Henry Arthur Milton, aka The Ringer, a legendary assassin who killed for personal veng...read more »

A story of crime chiefly connected with diamond mines. A series of stories of mysterious crimes and strange events. The problems are solved, not by a co...read more »

What if the head honcho of one of the country’s most lurid gossip rags was suspected of running a very lucrative sideline in extortion of the wealthy an...read more »

Both Scotland Yard and the criminal community of London are trying to discover the identity of “the Squealer”. This mysterious fence forces criminals to...read more »

If you like a villain to be a proper villain then Oberzhon is the genuine article. What a villain! What an adventure! There are crimes for which no puni...read more »