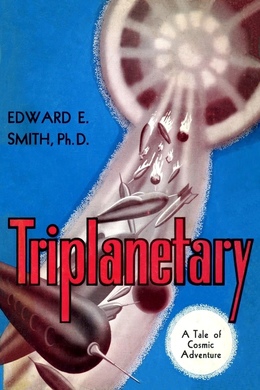 The Arisians, benevolent humanoids who have declared themselves Guardians of Civilization, war with the Eddoreans, shapeless, malevolent beings, hungry for power at any price. They fight on both physical and mental levels, wielding weaponry of inconceivable destructiveness. And their battleground is a tiny planet in a remote galaxy: Earth. The swamping of Atlantis, the fall of Rome, the wars that wrack the world and blaze through space - all may seem historical accidents to the men involved, but each in reality is a move in a save universe-wide power struggle…

Two thousand million or so years ago two galaxies were colliding; or, rather, were passing through each other. A couple of hundreds of millions of years either way do not matter, since at least that much time was required for the inter-passage. At about that same time–within the same plus-or-minus ten percent margin of error, it is believed–practically all of the suns of both those galaxies became possessed of planets.

There is much evidence to support the belief that it was not merely a coincidence that so many planets came into being at about the same time as the galactic inter-passage. Another school of thought holds that it was pure coincidence; that all suns have planets as naturally and as inevitably as cats have kittens.

Be that as it may, Arisian records are clear upon the point that before the two galaxies began to coalesce, there were never more than three solar systems present in either; and usually only one. Thus, when the sun of the planet upon which their race originated grew old and cool, the Arisians were hard put to it to preserve their culture, since they had to work against time in solving the engineering problems associated with moving a planet from an older to a younger sun.

Since nothing material was destroyed when the Eddorians were forced into the next plane of existence, their historical records also have become available. Those records–folios and tapes and playable discs of platinum alloy, resistant indefinitely even to Eddore’s noxious atmosphere–agree with those of the Arisians upon this point. Immediately before the Coalescence began there was one, and only one, planetary solar system in the Second Galaxy; and, until the advent of Eddore, the Second Galaxy was entirely devoid of intelligent life.

Thus for millions upon untold millions of years the two races, each the sole intelligent life of a galaxy, perhaps of an entire space-time continuum, remained completely in ignorance of each other. Both were already ancient at the time of the Coalescence. The only other respect in which the two were similar, however, was in the possession of minds of power.

Since Arisia was Earth-like in composition, atmosphere, and climate, the Arisians were at that time distinctly humanoid. The Eddorians were not. Eddore was and is large and dense; its liquid a poisonous, sludgy syrup; its atmosphere a foul and corrosive fog. Eddore was and is unique; so different from any other world of either galaxy that its very existence was inexplicable until its own records revealed the fact that it did not originate in normal space-time at all, but came to our universe from some alien and horribly different other.

As differed the planets, so differed the peoples. The Arisians went through the usual stages of savagery and barbarism on the way to Civilization. The Age of Stone. The Ages of Bronze, of Iron, of Steel, and of Electricity. Indeed, it is probable that it is because the Arisians went through these various stages that all subsequent Civilizations have done so, since the spores which burgeoned into life upon the cooling surfaces of all the planets of the commingling galaxies were Arisian, not Eddorian, in origin. Eddorian spores, while undoubtedly present, must have been so alien that they could not develop in any one of the environments, widely variant although they are, existing naturally or coming naturally into being in normal space and time.

The Arisians–especially after atomic energy freed them from physical labor–devoted themselves more and ever more intensively to the exploration of the limitless possibilities of the mind.

Even before the Coalescence, then, the Arisians had need neither of space-ships nor of telescopes. By power of mind alone they watched the lenticular aggregation of stars which was much later to be known to Tellurian astronomers as Lundmark’s Nebula approach their own galaxy. They observed attentively and minutely and with high elation the occurrence of mathematical impossibility; for the chance of two galaxies ever meeting in direct, central, equatorial-plane impact and of passing completely through each other is an infinitesimal of such a high order as to be, even mathematically, practically indistinguishable from zero.

They observed the birth of numberless planets, recording minutely in their perfect memories every detail of everything that happened; in the hope that, as ages passed, either they or their descendants would be able to develop a symbology and a methodology capable of explaining the then inexplicable phenomenon. Carefree, busy, absorbedly intent, the Arisian mentalities roamed throughout space–until one of them struck an Eddorian mind.