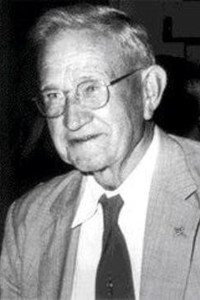 Edward Elmer Smith, also known as E.E. “Doc” Smith, was an early science fiction author who is sometimes referred to as the father of Space Opera. Smith’s novels are generally considered to be the classic space operas, and he is sometimes called the “first nova” of twentieth century science fiction. Smith expressed a preference for inventing fictional technologies that were not strictly impossible (so far as the science of the day was aware) but highly unlikely: “the more unlikely the better” was his phrase. (source: Wikipedia)

No human being had ever landed on the hidden planet of Arisia. A mysterious barrier, hanging unseen in space, turned back all ships. Then the word came ...read more »

The space-pirates of Boskone raided at will, menacing the whole structure of interstellar civilization. Master-minded by a super-scientist, their conque...read more »

Somewhere among the galaxies was the stronghold of Boskone, a network of brilliant interplanetary criminals, whose mania for conquest threatened the fut...read more »

Jarvis Hilton is in charge of a handpicked team of scientists – and a navy warship on a deep space mission, dubbed Project Theta Orionis. On the outboun...read more »

Kim Kinnison, Number One man of his time, had faced challenges before - but rarely one as daunting as this. To him fell the perilous task of infiltratin...read more »

Scientists Dick Seaton and Marc DuQuesne were the deadliest enemies in the galaxy and their feud had blazed among the stars and challenged the history o...read more »

Our hero’s family are in deep space when they are attacked by the intellectuals. In order to survive the attack they rotate into the 4th dimension and a...read more »

When the Inter-Planetary Corporation’s crack liner Arcturus took off on a routine flight to Mars, it turned out to be the beginning of a most unexpected...read more »

Bursting right through the four-dimensional travel zone of subspace, Tellurian psiontists make an amazing discovery on the other side. Beyond the bounds...read more »

NOTE: this is the original short story. For the full length novel, see the link below. There has always been, and will always be, the problem of surviv...read more »

They were four of the greatest minds in the Universe: Two men and two women, all Psionic Primes, lost in an experimental spaceship billions of parsecs f...read more »

It’s the 25th Century, and humanity has colonized a great deal of the galaxy, including several worlds apparently inhospitable to homo sapiens. The form...read more »

One man against the basic energy of the universe, unleashed in ravening fury that was Storm Cloud. Unique was the only way to describe him, yet alone in...read more »

The Arisians, benevolent humanoids who have declared themselves Guardians of Civilization, war with the Eddoreans, shapeless, malevolent beings, hungry ...read more »