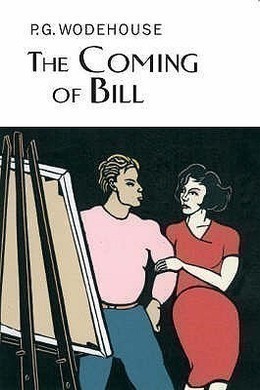 The Coming of Bill

The Coming of Bill is the nearest Wodehouse ever came to a serious novel, although the influence of the musical comedies he was writing at the time is never far away. Bill is the child of Ruth, a spoilt heiress, and Kirk, an impecunious artist of perfect physique. Their marriage has been arranged by Ruth’s aunt, a believer in eugenics who then takes charge of the baby. The story, set entirely in New York and Connecticut, concerns the young couple’s campaign to retrieve their child from the overbearing Mrs Porter and establish a normal family life. They are eventually successful, but only after a series of comic mishaps in a story which features a galaxyof vintage Wodehouse characters, including the bossy aunt, a tetchy millionaire, a good-natured ex-boxer and an orotund English butler.

Mrs. Lora Delane Porter dismissed the hireling who had brought her automobile around from the garage and seated herself at the wheel. It was her habit to refresh her mind and improve her health by a daily drive between the hours of two and four in the afternoon.

The world knows little of its greatest women, and it is possible that Mrs. Porter’s name is not familiar to you. If this is the case, I am pained, but not surprised. It happens only too often that the uplifter of the public mind is baulked by a disinclination on the part of the public mind to meet him or her half-way. The uplifter does his share. He produces the uplifting book. But the public, instead of standing still to be uplifted, wanders off to browse on coloured supplements and magazine stories.

If you are ignorant of Lora Delane Porter’s books that is your affair. Perhaps you are more to be pitied than censured. Nature probably gave you the wrong shape of forehead. Mrs. Porter herself would have put it down to some atavistic tendency or pre-natal influence. She put most things down to that. She blamed nearly all the defects of the modern world, from weak intellects to in-growing toe-nails, on long-dead ladies and gentlemen who, safe in the family vault, imagined that they had established their alibi. She subpoenaed grandfathers and even great-grandfathers to give evidence to show that the reason Twentieth-Century Willie squinted or had to spend his winters in Arizona was their own shocking health ‘way back in the days beyond recall.

Mrs. Porter’s mind worked backward and forward. She had one eye on the past, the other on the future. If she was strong on heredity, she was stronger on the future of the race. Most of her published works dealt with this subject. A careful perusal of them would have enabled the rising generation to select its ideal wife or husband with perfect ease, and, in the event of Heaven blessing the union, her little volume, entitled “The Hygienic Care of the Baby,” which was all about germs and how to avoid them, would have insured the continuance of the direct succession.

Unfortunately, the rising generation did not seem disposed to a careful perusal of anything except the baseball scores and the beauty hints in the Sunday papers, and Mrs. Porter’s public was small. In fact, her only real disciple, as she sometimes told herself in her rare moods of discouragement, was her niece, Ruth Bannister, daughter of John Bannister, the millionaire. It was not so long ago, she reflected with pride, that she had induced Ruth to refuse to marry Basil Milbank–a considerable feat, he being a young man of remarkable personal attractions and a great match in every way. Mrs. Porter’s objection to him was that his father had died believing to the last that he was a teapot.

There is nothing evil or degrading in believing oneself a teapot, but it argues a certain inaccuracy of the thought processes; and Mrs. Porter had used all her influence with Ruth to make her reject Basil. It was her success that first showed her how great that influence was. She had come now to look on Ruth’s destiny as something for which she was personally responsible–a fact which was noted and resented by others, in particular Ruth’s brother Bailey, who regarded his aunt with a dislike and suspicion akin to that which a stray dog feels towards the boy who saunters towards him with a tin can in his hand.

To Bailey, his strong-minded relative was a perpetual menace, a sort of perambulating yellow peril, and the fact that she often alluded to him as a worm consolidated his distaste for her.