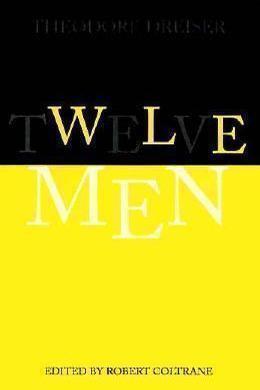 Best remembered for being one of the leading figures in the school of fiction writing known as naturalism, American author Theodore Dreiser got his professional start as a journalist, and he brings his love of research and detail to this collection of biographical essays celebrating the lives and contributions of 12 people who influenced him.

I met him in connection with a psychic depression which only partially reflected itself in my physical condition. I might almost say that I was sick spiritually. At the same time I was rather strongly imbued with a contempt for him and his cure. I had heard of him for years. To begin with, he was a wrestler of repute, or rather ex-wrestler, retired undefeated champion of the world. As a boy I had known that he had toured America with Modjeska as Charles, the wrestler, in “As You Like It.” Before or after that he had trained John L. Sullivan, the world’s champion prize fighter of his day, for one of his most successful fights, and that at a time when Sullivan was unfitted to fight any one. Before that, in succession, from youth up, he had been a peasant farmer’s son in Ireland, a scullion in a ship’s kitchen earning his way to America, a “beef slinger” for a packing company, a cooks’ assistant and waiter in a Bowery restaurant, a bouncer in a saloon, a rubber down at prize fights, a policeman, a private in the army during the Civil War, a ticket-taker, exhibition wrestler, “short-change man” with a minstrel company, later a circus, until having attained his greatest fame as champion wrestler of the world, and as trainer of John L. Sullivan, he finally opened a sporting sanitarium in some county in upper New York State which later evolved into the great and now decidedly fashionable institution in Westchester, near New York.

It has always been interesting to me to see in what awe men of this type or profession are held by many in the more intellectual walks of life as well as by those whose respectful worship is less surprising,–those who revere strength, agility, physical courage, so-called, brute or otherwise. There is a kind of retiring worshipfulness, especially in men and children of the lower walks, for this type, which must be flattering in the extreme.

However, in so far as Culhane was concerned at this time, the case was different. Whatever he had been in his youth he was not that now, or at least his earlier rawness had long since been glazed over by other experiences. Self-education, an acquired politeness among strangers and a knowledge of the manners and customs of the better-to-do, permitted him to associate with them and to accept if not copy their manners and to a certain extent their customs in his relations with them. Literally, he owned hundreds of the best acres of the land about him, in one of the most fashionable residence sections of the East. He had already given away to some Sisters of Mercy a great estate in northern New York. His stables contained every type of fashionable vehicle and stalled and fed sixty or seventy of the worst horses, purposely so chosen, for the use of his “guests.” Men of all professions visited his place, paid him gladly the six hundred dollars in advance which he asked for the course of six weeks’ training, and brought, or attempted to, their own cars and retinues, which they lodged in the vicinity but could not use. I myself was introduced or rather foisted upon him by my dear brother, whose friend if not crony–if such a thing could have been said to exist in his life–he was. I was taken to him in a very somber and depressed mood and left; he rarely if ever received guests in person or at once. On the way, and before I had been introduced, I was instructed by my good brother as to his moods, methods, airs and tricks, supposed or rumored to be so beneficial in so many cases. They were very rough–purposely so.