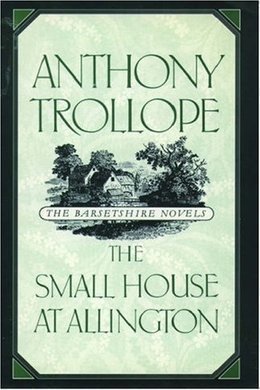 The Small House at Allington

The fifth novel of the Chronicles of Barsetshire series primarily relates the story of Lily Dale, a young woman living in the dower house of the Allington estate with her mother and sister Bell. Although Lily is secretly loved by a junior clerk in a tax office, John Eames, she becomes enamored with Adolphus Crosbie, an ambitious and egocentric man from a more urban environment. When Crosbie’s fickle behavior leaves Lily heartbroken, she must decide if she will accept the honest suit of Eames, or if she will opt for a protected, solitary life of spinsterhood. In addition to the struggle of Trollope’s most well-liked heroine, the author includes a host of other characters who enhance the narrative and its masterful portrayal of the inner lives and complexity of men and women.

Of course there was a Great House at Allington. How otherwise should there have been a Small House? Our story will, as its name imports, have its closest relations with those who lived in the less dignified domicile of the two; but it will have close relations also with the more dignified, and it may be well that I should, in the first instance, say a few words as to the Great House and its owner.

The squires of Allington had been squires of Allington since squires, such as squires are now, were first known in England. From father to son, and from uncle to nephew, and, in one instance, from second cousin to second cousin, the sceptre had descended in the family of the Dales; and the acres had remained intact, growing in value and not decreasing in number, though guarded by no entail and protected by no wonderful amount of prudence or wisdom. The estate of Dale of Allington had been coterminous with the parish of Allington for some hundreds of years; and though, as I have said, the race of squires had possessed nothing of superhuman discretion, and had perhaps been guided in their walks through life by no very distinct principles, still there had been with them so much of adherence to a sacred law, that no acre of the property had ever been parted from the hands of the existing squire. Some futile attempts had been made to increase the territory, as indeed had been done by Kit Dale, the father of Christopher Dale, who will appear as our squire of Allington when the persons of our drama are introduced. Old Kit Dale, who had married money, had bought outlying farms,–a bit of ground here and a bit there,–talking, as he did so, much of political influence and of the good old Tory cause. But these farms and bits of ground had gone again before our time. To them had been attached no religion. When old Kit had found himself pressed in that matter of the majority of the Nineteenth Dragoons, in which crack regiment his second son made for himself quite a career, he found it easier to sell than to save–seeing that that which he sold was his own and not the patrimony of the Dales. At his death the remainder of these purchases had gone. Family arrangements required completion, and Christopher Dale required ready money. The outlying farms flew away, as such new purchases had flown before; but the old patrimony of the Dales remained untouched, as it had ever remained.

It had been a religion among them; and seeing that the worship had been carried on without fail, that the vestal fire had never gone down upon the hearth, I should not have said that the Dales had walked their ways without high principle. To this religion they had all adhered, and the new heir had ever entered in upon his domain without other encumbrances than those with which he himself was then already burdened. And yet there had been no entail. The idea of an entail was not in accordance with the peculiarities of the Dale mind. It was necessary to the Dale religion that each squire should have the power of wasting the acres of Allington,–and that he should abstain from wasting them. I remember to have dined at a house, the whole glory and fortune of which depended on the safety of a glass goblet. We all know the story. If the luck of Edenhall should be shattered, the doom of the family would be sealed. Nevertheless I was bidden to drink out of the fatal glass, as were all guests in that house. It would not have contented the chivalrous mind of the master to protect his doom by lock and key and padded chest. And so it was with the Dales of Allington. To them an entail would have been a lock and key and a padded chest; but the old chivalry of their house denied to them the use of such protection.

I have spoken something slightingly of the acquirements and doings of the family; and indeed their acquirements had been few and their doings little. At Allington, Dale of Allington had always been known as a king. At Guestwick, the neighbouring market town, he was a great man–to be seen frequently on Saturdays, standing in the market-place, and laying down the law as to barley and oxen among men who knew usually more about barley and oxen than did he. At Hamersham, the assize town, he was generally in some repute, being a constant grand juror for the county, and a man who paid his way. But even at Hamersham the glory of the Dales had, at most periods, begun to pale, for they had seldom been widely conspicuous in the county, and had earned no great reputation by their knowledge of jurisprudence in the grand jury room. Beyond Hamersham their fame had not spread itself.