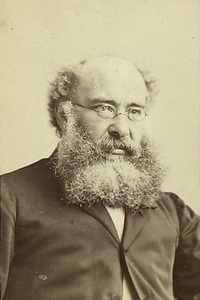 Anthony Trollope was one of the most successful, prolific and respected English novelists of the Victorian era. Some of his best-loved works, collectively known as the Chronicles of Barsetshire, revolve around the imaginary county of Barsetshire. He also wrote perceptive novels on political, social, and gender issues, and on other topical matters. Noted fans have included Sir Alec Guinness (who never travelled without a Trollope novel), former British Prime Ministers Harold Macmillan and Sir John Major, economist John Kenneth Galbraith, English judge Lord Denning, American novelists Sue Grafton and Dominick Dunne, poet Edward Fitzgerald, artist Edward Gorey, who kept a complete set of his books, American author Robert Caro and soap opera writer Harding Lemay. Trollope’s literary reputation dipped somewhat during the last years of his life, but he had regained the esteem of critics by the mid-twentieth century. (source: Wikipedia)

Barchester Towers is the second of the six Chronicles of Barsetshire, the work in which, after a ten years’ apprenticeship, Trollope finally found his d...read more »

With ‘Can You Forgive Her?’ Trollope begins his masterful series of Parliamentary novels, but here he is concerned with the politics of love and the dem...read more »

Doctor Thorne is the third novel in the Barchester series. Doctor Thorne adopts his niece Mary, keeping secret her illegitimate birth as he introduces h...read more »

The fourth of the Barsetshire Chronicles, Framley Parsonage was published to wide acclaim and has always been one of Trollope’s most popular novels. In ...read more »

Louis Trevelyan seems the most fortunate of mid-Victorian gentlemen: young, rich, well-educated, handsome, and with a beautiful wife. But his life is ru...read more »

The novel is set against the background of the Reform Bill of 1867, and focuses on an Irish Member of the British House of Commons; in it Trollope explo...read more »

The fourth novel in Trollope’s Palliser series, Phineas Redux stands on its own as a compelling work of political intrigue, personal crisis, and romanti...read more »

Plantagenet Palliser, the Duke of Omnium and former Prime Minister of England, is widowed and wracked by grief. Struggling to adapt to life without his ...read more »

The Eustace Diamonds is a social comedy of greed and deception that meticulously studies the Victorian society. The protagonist, Lizzie is a beautiful b...read more »

Anthony Trollope was a masterful satirist with an unerring eye for the most intrinsic details of human behavior and an imaginative grasp of the preoccup...read more »

Despite his mysterious antecedents, an unscrupulous financial speculator, Ferdinand Lopez, aspires to marry into respectability and wealth and join the...read more »

The fifth novel of the Chronicles of Barsetshire series primarily relates the story of Lily Dale, a young woman living in the dower house of the Allingt...read more »

The Warden centers on Mr. Harding, a clergyman of great personal integrity who is nevertheless in possession of an income from a charity far in excess o...read more »

The Way We Live Now — regarded by many as Anthony Trollope’s greatest novel — encompasses in its broad scope much of the business, political, social, an...read more »

A collection of short stories of travel, this is a great read for anyone and considered a classic by some; it captures the magic of the open road.