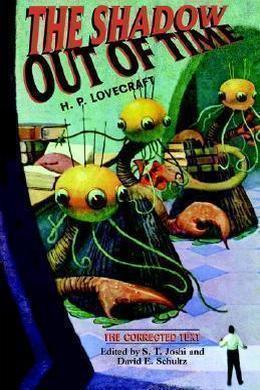 The Shadow Out Of Time

Nathaniel Wingate Peaslee is a professor of political economy at Miskatonic University. Following a fainting spell in 1908 he returns to his senses in 1913 with no recollection of the last five years of his life. As he endeavors to discover the truth about his lost years, he becomes increasingly tormented by vivid and disturbing dreams; dreams that will lead him on a journey through time and space to unlock the secrets of the universe.

After twenty-two years of nightmare and terror, saved only by a desperate conviction of the mythical source of certain impressions, I am unwilling to vouch for the truth of that which I think I found in Western Australia on the night of 17-18 July 1935. There is reason to hope that my experience was wholly or partly an hallucination—for which, indeed, abundant causes existed. And yet, its realism was so hideous that I sometimes find hope impossible.

If the thing did happen, then man must be prepared to accept notions of the cosmos, and of his own place in the seething vortex of time, whose merest mention is paralyzing. He must, too, be placed on guard against a specific, lurking peril which, though it will never engulf the whole race, may impose monstrous and unguessable horrors upon certain venturesome members of it.

It is for this latter reason that I urge, with all the force of my being, final abandonment of all the attempts at unearthing those fragments of unknown, primordial masonry which my expedition set out to investigate.

Assuming that I was sane and awake, my experience on that night was such as has befallen no man before. It was, moreover, a frightful confirmation of all I had sought to dismiss as myth and dream. Mercifully there is no proof, for in my fright I lost the awesome object which would—if real and brought out of that noxious abyss—have formed irrefutable evidence.

When I came upon the horror I was alone—and I have up to now told no one about it. I could not stop the others from digging in its direction, but chance and the shifting sand have so far saved them from finding it. Now I must formulate some definite statement—not only for the sake of my own mental balance, but to warn such others as may read it seriously.

These pages—much in whose earlier parts will be familiar to close readers of the general and scientific press—are written in the cabin of the ship that is bringing me home. I shall give them to my son, Professor Wingate Peaslee of Miskatonic University—the only member of my family who stuck to me after my queer amnesia of long ago, and the man best informed on the inner facts of my case. Of all living persons, he is least likely to ridicule what I shall tell of that fateful night.

I did not enlighten him orally before sailing, because I think he had better have the revelation in written form. Reading and re-reading at leisure will leave with him a more convincing picture than my confused tongue could hope to convey.

He can do anything that he thinks best with this account—showing it, with suitable comment, in any quarters where it will be likely to accomplish good. It is for the sake of such readers as are unfamiliar with the earlier phases of my case that I am prefacing the revelation itself with a fairly ample summary of its background.

My name is Nathaniel Wingate Peaslee, and those who recall the newspaper tales of a generation back—or the letters and articles in psychological journals six or seven years ago—will know who and what I am. The press was filled with the details of my strange amnesia in 1908-13, and much was made of the traditions of horror, madness, and witchcraft which lurked behind the ancient Massachusetts town then and now forming my place of residence. Yet I would have it known that there is nothing whatever of the mad or sinister in my heredity and early life. This is a highly important fact in view of the shadow which fell so suddenly upon me from outside sources.

It may be that centuries of dark brooding had given to crumbling, whisper- haunted Arkham a peculiar vulnerability as regards such shadows—though even this seems doubtful in the light of those other cases which I later came to study. But the chief point is that my own ancestry and background are altogether normal. What came, came from somewhere else—where I even now hesitate to assert in plain words.

I am the son of Jonathan and Hannah (Wingate) Peaslee, both of wholesome old Haverhill stock. I was born and reared in Haverhill—at the old homestead in Boardman Street near Golden Hill—and did not go to Arkham till I entered Miskatonic University as instructor of political economy in 1895.

For thirteen years more my life ran smoothly and happily. I married Alice Keezar of Haverhill in 1896, and my three children, Robert, Wingate and Hannah were born in 1898, 1900, and 1903, respectively. In 1898 I became an associate professor, and in 1902 a full professor. At no time had I the least interest in either occultism or abnormal psychology.

It was on Thursday, 14 May 1908, that the queer amnesia came. The thing was quite sudden, though later I realized that certain brief, glimmering visions of several, hours previous—chaotic visions which disturbed me greatly because they were so unprecedented—must have formed premonitory symptoms. My head was aching, and I had a singular feeling—altogether new to me—that some one else was trying to get possession of my thoughts.